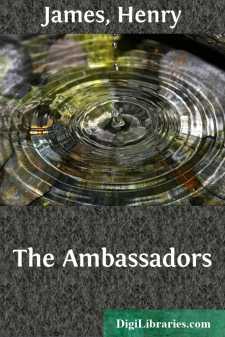 Strether's first question, when he reached the hotel, was about his friend; yet on his learning that Waymarsh was apparently not to arrive till evening he was not wholly disconcerted. A telegram from him bespeaking a room "only if not noisy," reply paid, was produced for the enquirer at the office, so that the understanding they should meet at Chester rather than at Liverpool remained to that extent sound. The same secret principle, however, that had prompted Strether not absolutely to desire Waymarsh's presence at the dock, that had led him thus to postpone for a few hours his enjoyment of it, now operated to make him feel he could still wait without disappointment. They would dine together at the worst, and, with all respect to dear old Waymarsh—if not even, for that matter, to himself—there was little fear that in the sequel they shouldn't see enough of each other. The principle I have just mentioned as operating had been, with the most newly disembarked of the two men, wholly instinctive—the fruit of a sharp sense that, delightful as it would be to find himself looking, after so much separation, into his comrade's face, his business would be a trifle bungled should he simply arrange for this countenance to present itself to the nearing steamer as the first "note," of Europe. Mixed with everything was the apprehension, already, on Strether's part, that it would, at best, throughout, prove the note of Europe in quite a sufficient degree.

That note had been meanwhile—since the previous afternoon, thanks to this happier device—such a consciousness of personal freedom as he hadn't known for years; such a deep taste of change and of having above all for the moment nobody and nothing to consider, as promised already, if headlong hope were not too foolish, to colour his adventure with cool success. There were people on the ship with whom he had easily consorted—so far as ease could up to now be imputed to him—and who for the most part plunged straight into the current that set from the landing-stage to London; there were others who had invited him to a tryst at the inn and had even invoked his aid for a "look round" at the beauties of Liverpool; but he had stolen away from every one alike, had kept no appointment and renewed no acquaintance, had been indifferently aware of the number of persons who esteemed themselves fortunate in being, unlike himself, "met," and had even independently, unsociably, alone, without encounter or relapse and by mere quiet evasion, given his afternoon and evening to the immediate and the sensible. They formed a qualified draught of Europe, an afternoon and an evening on the banks of the Mersey, but such as it was he took his potion at least undiluted. He winced a little, truly, at the thought that Waymarsh might be already at Chester; he reflected that, should he have to describe himself there as having "got in" so early, it would be difficult to make the interval look particularly eager; but he was like a man who, elatedly finding in his pocket more money than usual, handles it a while and idly and pleasantly chinks it before addressing himself to the business of spending....