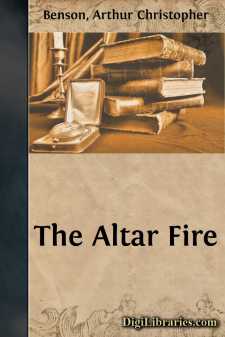 I had intended to allow the records that follow—the records of a pilgrimage sorely beset and hampered by sorrow and distress—to speak for themselves. Let me only say that one who makes public a record so intimate and outspoken incurs, as a rule, a certain responsibility. He has to consider in the first place, or at least he cannot help instinctively considering, what the wishes of the writer would have been on the subject. I do not mean that one who has to decide such a point is bound to be entirely guided by that. He must weigh the possible value of the record to other spirits against what he thinks that the writer himself would have personally desired. A far more important consideration is what living people who play a part in such records feel about their publication. But I cannot help thinking that our whole standard in such matters is a very false and conventional one. Supposing, for instance, that a very sacred and intimate record, say, two hundred years old, were to be found among some family papers, it is inconceivable that any one would object to its publication on the ground that the writer of it, or the people mentioned in it, would not have wished it to see the light. We show how weak our faith really is in the continuance of personal identity after death, by allowing the lapse of time to affect the question at all; just as we should consider it a horrible profanation to exhume and exhibit the body of a man who had been buried a few years ago, while we approve of the action of archaeologists who explore Egyptian sepulchres, subscribe to their operations, and should consider a man a mere sentimentalist who suggested that the mummies exhibited in museums ought to be sent back for interment in their original tombs. We think vaguely that a man who died a few years ago would in some way be outraged if his body were to be publicly displayed, while we do not for an instant regard the possible feelings of delicate and highly-born Egyptian ladies, on whose seemly sepulture such anxious and tender care was expended so many centuries ago.

But in this case there is no such responsibility. None of the persons concerned have any objection to the publication of these records, and as for the writer himself he was entirely free from any desire for a fastidious seclusion. His life was a secluded one enough, and he felt strongly that a man has a right to his own personal privacy. But his own words sufficiently prove, if proof were needed, that he felt that to deny the right of others to participate in thoughts and experiences, which might uplift or help a mourner or a sufferer, was a selfish form of individualism with which he had no sympathy whatever. He felt, and I have heard him say, that one has no right to withhold from others any reflections which can console and sustain, and he held it to be the supreme duty of a man to ease, if he could, the burden of another. He knew that there is no sympathy in the world so effective as the sharing of similar experiences, as the power of assuring a sufferer that another has indeed trodden the same dark path and emerged into the light of Heaven. I will even venture to say that he deliberately intended that his records should be so used, for purposes of alleviation and consolation, and the bequest that he made of his papers to myself, entrusting them to my absolute discretion, makes it clear to me that I have divined his wishes in the matter. I think, indeed, that his only doubt was a natural diffidence as to whether the record had sufficient importance to justify its publication. In any case, my own duty in the matter is to me absolutely clear.

But I think that it will be as well for me to sketch a brief outline of my friend's life and character. I would have preferred to have done this, if it had been possible, by allowing him to speak for himself. But the earlier Diaries which exist are nothing but the briefest chronicle of events. He put his earlier confessions into his books, but he was in many ways more interesting than his books, and so I will try and draw a portrait of him as he appeared to one of his earliest friends. I knew him first as an undergraduate, and our friendship was unbroken after that. The Diary, written as it is under the shadow of a series of calamities, gives an impression of almost wilful sadness which is far from the truth. The requisite contrast can only be attained by representing him as he appeared to those who knew him.

He was the son of a moderately wealthy country solicitor, and was brought up on normal lines. His mother died while he was a boy. He had one brother, younger than himself, and a sister who was younger still. He went to a leading public school, where he was in no way distinguished either in work or athletics. I gathered, when I first knew him, that he had been regarded as a clever, quiet, good-natured, simple-minded boy, with a considerable charm of manner, but decidedly retiring. He was not expected to distinguish himself in any way, and he did not seem to have any particular ambitions. I went up to Cambridge at the same time as he, and we formed a very close friendship....