The Allis Family; or, Scenes of Western Life 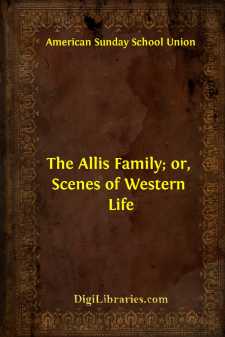 Mr. and Mrs. Allis lived away out West, on a broad prairie, where Mr. Allis was busily engaged in "making a farm." Perhaps some of my young readers, who have always been accustomed to see farms already "made," will not understand what I mean by "making a farm;" and I will try to tell them.

First of all, let them try to fancy a large meadow, either perfectly flat or a little uneven, as large, perhaps, as can be measured with the eye, and sometimes without a single tree, or scarcely a clump of bushes. There will be no fences in sight, and sometimes no streams of water, but the surface of the ground is covered with high, coarse grass. This is what Western people call a "prairie."

In order to "make a farm," this ground must be ploughed, or, as Western people say, "broken up." Some of the children would smile, I think, if they were to see a regular "breaking team" before a "breaking plough." This plough is quite unlike that which is used in the older States, and it takes five, six, and sometimes as many as eight yoke of oxen to draw it. This ploughing is usually done in June. After ploughing, the ground must be enclosed, and then it is ready for the seed.

Some people make curious mistakes when they undertake to make a new farm. Mr. Allis was one of these persons. He arrived at the little town of B——, with his family, late in the fall, and immediately set about looking for a location. Several miles from B—— he found a place that seemed to suit him. The soil was rich, and apparently inexhaustible; but it was poorly watered, and destitute of any timber suitable for building or fencing, and there was very little which was fit for fuel. The great thing he thought of was a large farm.

After a while he found out his mistake, but it was too late for him to help it, for his money was nearly all expended for land. But Mr. Allis was a resolute man, and he immediately set himself to work to do the best he could. It was a long walk to the grove where he went every day to cut down trees for his cabin, and to split rails for his fence, and a whole day's work to go twice with his oxen to draw the logs and rails to his farm. But he rose early, and was ready to begin his work with the dawn. On rainy and stormy days, when he could not be out, he was at work in a shop near his house, making doors and window-frames, and cupboards, and other things for his new house.

Early in the spring the cabin was reared, and soon all was in readiness for the removal of the family, which consisted of Mrs. Allis, Mary, a distant relative whose home was with her, and two little twin-daughters, Annie and Susie, who were about five years old at this time. These little girls loved each other very much, and usually played very pleasantly together. But it was sometimes the case that, like other children, they had their little troubles, and were selfish, and of course unhappy.

One day Mrs. Allis was very sick, and she called the little girls to her, and told them they might go up-stairs and play, but they must try to be very good girls, and very quiet, for she could not bear the noise of their voices....