The Adventure Of Elizabeth Morey, of New York 1901 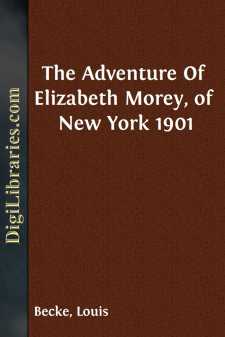 In the sea story of Australia, from the days of Captain Phillip in 1788, to the end of the "fifties" in the present century, American ships and seamen have no little part. First they came into the harbour of Sydney Cove as traders carrying provisions for sale to the half-starved settlers, then as whalers, and before another thirty years had passed, the starry banner might be met with anywhere in the Pacific, from the sterile shores of the Aleutian Islands to the coasts of New Zealand and Tasmania.

Early one morning in October, 1804, the American ship Union sailed in through Sydney Heads, and dropped anchor in the Cove. She was last from Tongatabu, the principal island of the Friendly Group. As soon as she had been boarded by the naval officer in charge of the port, and her papers examined, the master stated that he had had a very exciting adventure with the Tongatabu natives, who had attempted to cut off the ship, and that there was then on board a young woman named Elizabeth Morey, whom he had rescued from captivity among the savages.

In a few minutes the young woman made her appearance in the main cabin, and was introduced to the officer. Her age was about six-and-twenty, and her manners "extremely engaging;" yet whilst she expressed her willingness to tell the story of her adventures among the islanders, she declined to say anything of her birth or parentage beyond the fact that she was a native of New York, and some years previously had made her way to the Cape of Good Hope.

Her extraordinary narrative was borne out in all details as far as her rescue was concerned by the master of the Union, who, she said, had treated her with undeviating kindness and respect.

This is her story:—

In February of the year 1802, when she was living at the Cape of Good Hope, she made the acquaintance of a Captain Melton, the master of the American ship Portland. His dashing appearance, his command of apparently unlimited money, and his protestations of affection for the unfortunate girl soon led her to respond to his advances, and ultimately to consent to accompany him on a voyage to the islands of the South Pacific.

After a prosperous voyage the Portland arrived at what is now known as Nukualofa Harbour, on the Island of Tongatabu. Within a few hours after anchoring, Captain Melton received a note from a white man named Doyle, who was the only European living on the island, asking him to come on shore and visit the chief, who particularly wished to see him and secure his aid in repelling an invasion from the neighbouring group of islands known as Haabai. Had Melton known that this man Doyle was an escaped convict from Van Dieman's Land, he would at least have been careful; had he known that the man was, in addition, a treacherous and bloodthirsty villain, he would have hove-up anchor, and, sailing away, escaped his fate. But Doyle, in his note, enumerated the advantages that would accrue to him (Melton) by assisting the chief, and the seaman fell into the trap. "You must try," said the writer of the letter, "to send at least one boat's crew well armed."

Melton was a man with an elastic conscience. Without troubling his head as to the right or wrong side of this quarrel among savages, he promptly complied with the request of the beachcomber, and called for volunteers; the whole of the ship's company responded. The chief mate, Gibson, picked four men; Anderson, the second officer, eight men, and these were at once despatched on shore by the captain.

The engagement came off on the following day, and the American allies of the chief (whom Miss Morey calls Ducara) inflicted fearful slaughter upon the enemy, and returned to the ship highly satisfied with themselves, and their native friends, who promised them every indulgence likely to gratify their tastes....