The Admirable Bashville or, Constancy Unrewarded 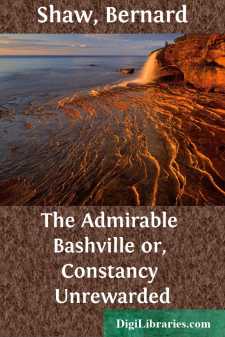 The Admirable Bashville is a product of the British law of copyright. As that law stands at present, the first person who patches up a stage version of a novel, however worthless and absurd that version may be, and has it read by himself and a few confederates to another confederate who has paid for admission in a hall licensed for theatrical performances, secures the stage rights of that novel, even as against the author himself; and the author must buy him out before he can touch his own work for the purposes of the stage.

A famous case in point is the drama of East Lynne, adapted from the late Mrs. Henry Wood's novel of that name. It was enormously popular, and is still the surest refuge of touring companies in distress. Many authors feel that Mrs. Henry Wood was hardly used in not getting any of the money which was plentifully made in this way through her story. To my mind, since her literary copyright probably brought her a fair wage for the work of writing the book, her real grievance was, first, that her name and credit were attached to a play with which she had nothing to do, and which may quite possibly have been to her a detestable travesty and profanation of her story; and second, that the authors of that play had the legal power to prevent her from having any version of her own performed, if she had wished to make one.

There is only one way in which the author can protect himself; and that is by making a version of his own and going through the same legal farce with it. But the legal farce involves the hire of a hall and the payment of a fee of two guineas to the King's Reader of Plays. When I wrote Cashel Byron's Profession I had no guineas to spare, a common disability of young authors. What is equally common, I did not know the law. A reasonable man may guess a reasonable law, but no man can guess a foolish anomaly. Fortunately, by the time my book so suddenly revived in America I was aware of the danger, and in a position to protect myself by writing and performing The Admirable Bashville. The prudence of doing so was soon demonstrated; for rumors soon reached me of several American stage versions; and one of these has actually been played in New York, with the boxing scenes under the management (so it is stated) of the eminent pugilist Mr. James J. Corbett. The New York press, in a somewhat derisive vein, conveyed the impression that in this version Cashel Byron sought to interest the public rather as the last of the noble race of the Byrons of Dorsetshire than as his unromantic self; but in justice to a play which I never read, and an actor whom I never saw, and who honorably offered to treat me as if I had legal rights in the matter, I must not accept the newspaper evidence as conclusive.

As I write these words, I am promised by the King in his speech to Parliament a new Copyright Bill. I believe it embodies, in our British fashion, the recommendations of the book publishers as to the concerns of the authors, and the notions of the musical publishers as to the concerns of the playwrights. As author and playwright I am duly obliged to the Commission for saving me the trouble of speaking for myself, and to the witnesses for speaking for me. But unless Parliament takes the opportunity of giving the authors of all printed works of fiction, whether dramatic or narrative, both playwright and copyright (as in America), such to be independent of any insertions or omissions of formulas about "all rights reserved" or the like, I am afraid the new Copyright Bill will leave me with exactly the opinion both of the copyright law and the wisdom of Parliament I at present entertain. As a good Socialist I do not at all object to the limitation of my right of property in my own works to a comparatively brief period, followed by complete Communism: in fact, I cannot see why the same salutary limitation should not be applied to all property rights whatsoever; but a system which enables any alert sharper to acquire property rights in my stories as against myself and the rest of the community would, it seems to me, justify a rebellion if authors were numerous and warlike enough to make one.

It may be asked why I have written The Admirable Bashville in blank verse. My answer is that I had but a week to write it in. Blank verse is so childishly easy and expeditious (hence, by the way, Shakespear's copious output), that by adopting it I was enabled to do within the week what would have cost me a month in prose....