The Abbatial Crosier or Bonaik and Septimine. A Tale of a Medieval Abbess 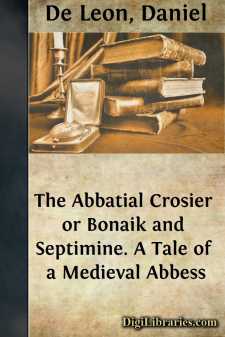 Cruel intestine wars between the descendants of the Frankish conquerors were devastating Gaul when the Arab invasion took place in 719. The invaders poured down from the Pyrenees and drove back or subjugated the Visigoths. The exchange of masters was almost a gain to the inhabitants of the region. The conquerors from the south were more civilized than those from the north. Many of the Gauls,—either freemen, or colonists or slaves—took so strongly to the southern invader that they even embraced his religion, the religion of Mahomet, allured thereto by the promises of a paradise peopled with houris. "The virtuous believer," declared the Koran, "will be taken to the delicious home of Eden, enchanted gardens, through which well-shaded rivers flow. There, ornamented with bracelets of gold, clad in green clothes of woven silk and resplendent with glory, the faithful will recline upon nuptial beds, the happy prize in the dwelling of delights." Preferring, accordingly, the white houris promised by the Koran to the winged seraphs of the Christian paradise, many Gauls embraced Mohamedanism with ardor. Mosques rose in Languedoc beside Christian churches. More tolerant than the bishops, the Arabs allowed the Christians to follow their own religion. Moreover, Mohamedanism, founded by Mahomet during the previous century, 608, acknowledged the divinity of the Scriptures and recognized Moses and the Jewish prophets as beings chosen by God, only it did not recognize the godship of Jesus. "Oh, ye, who have received the Scriptures, keep within the bounds of the faith. Speak only the truth about God. Jesus is the son of Mary, and he was sent by the All-High, but is not his son. Say not that God is a trinity. God is one. Jesus will not blush at being the servant of God. The angels that surround the throne of God obey God!"—thus spoke the Koran.

The town of Narbonne, capital of Languedoc under the dominion of the Arabs, had in 737 quite an Oriental aspect, due as much to the clearness of the sky as to the dress and customs of a large number of its inhabitants. The laurel shrubs, the green oaks and palm trees recalled the vegetation of Africa. Saracen women were seen going to or coming from the fountains with earthen vessels nicely balanced on their heads, and draped in their white clothes like the women of the time of Abraham, or of the young master of Nazareth. Camels with their long necks and loaded with merchandise left the town for Nimes, Beziers, Toulouse or Marseilles. The caravans passed on these journeys, along the fields, a great variety of settlements—mud hovels thatched with straw and inhabited by Gallic peasants, who were successively the slaves of the Visigoths and of the Musselmen; tents of a Barbary tribe, Arabian mountaineers who had descended to the plains from the peak of Mt. Atlas, and who preserved in Gaul the nomad habits of their old home, warriors, ever ready to mount their tireless and swift horses in answer to the first call of battle from the emir of the province; finally, and at long distances apart, on the crests of the mountains, high towers where, during war, the Saracens lighted fires for the purpose of signaling the approach of the enemy to one another.

In the almost Musselman town of Narbonne, the same as in all the other towns of Gaul under the sway of the Franks and the bishops, there were, sad to say, public market-places where slaves were set up for sale. But that which imparted a peculiar character to the market of Narbonne was the diversity of the races of the captives that were offered to purchasers. There were seen negroes and negresses in large numbers, as well as Ethiopians of ebony blackness; copper-colored mestizos; handsome young Greek girls and boys brought from Athens, Crete or Samos and taken prisoner on some of the frequent maritime raids made by the Arabs. A skilful politician, Mahomet, their prophet, had incited in his sectarians a passion for maritime expeditions. "The believer who dies on land feels a pain that is hardly comparable with the bite of an ant," says the Koran, "but the believer who dies at sea, feels on the contrary the delicious sensation of a man, who, a prey to burning thirst, is offered iced water mixed with citron and honey." Around the slave market stood numerous Arabian shops filled with merchandise mainly manufactured at Cordova or Granada, centers, at the time, of Saracen art and civilization: brilliant arms inlaid in arabesques with gold and silver, coffers of chiseled ivory, crystal cups, rich silk fabrics, embroidered hose, precious collars and bracelets....