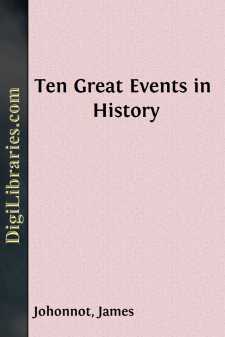 CHAPTER I. DEFENSE OF FREEDOM BY GREEK VALOR.

1. The great events in history are those where, upon special occasions, a man or a people have made a stand against tyranny, and have preserved or advanced freedom for the people. Sometimes tyranny has taken the form of the oppression of the many by the few in the same nation, and sometimes it has been the oppression of a weak nation by a stronger one. The successful revolt against tyranny, the terrible conflict resulting in the emancipation of a people, has always been the favorite theme of the historian, marking as it does a step in the progress of mankind from a savage to a civilized state.

2. One of the earliest as well as most notable of these conflicts of which we have an authentic account took place in Greece twenty-four hundred years ago, or five hundred years before the Christian era. At that time nearly all of Europe was inhabited by rude barbarous tribes. In all that broad land the arts and sciences which denote civilization had made their appearance only in the small and apparently insignificant peninsula of Greece, lying on the extreme southeast border adjoining Asia.

3. At a period before authentic history begins, it is probable that roving tribes of shepherds from the north took possession of the hills and valleys of Greece. Shut off on the north by mountain ranges, and on all other sides surrounded by the sea, these tribes were able to maintain a sturdy independence for many hundred years. The numerous harbors and bays which subdivide Greece invited to a maritime life, and at a very early time, the descendants of the original shepherds became skillful navigators and courageous adventurers.

4. The voyages of Aeneas and Ulysses in the siege of Troy, and those of Jason in search of the golden fleece, and of Perseus to the court of King Minos, are the mythological accounts, embellished by imagination and distorted by time, of what were real voyages. Crossing the Mediterranean, Grecian adventurers became acquainted with the Egyptians, then the most civilized people of the world; and from Egypt they took back to their native country the germs of the arts and sciences which afterward made Greece so famous.

5. Thence improvements went forward with rapid strides. Hints received from Egypt were reproduced in higher forms. Massive temples became light and airy, rude sculpture became beautiful by conforming to natural forms, and hieroglyphics developed into the letters which Cadmus invented or improved. Schools were established, athletic sports were encouraged, aesthetic taste was developed, until in the arts, in philosophy, in science, and in literature the Greeks took the lead of all peoples.

6. As population increased, colonies went out, settling upon the adjacent coasts of Asia and upon the islands farther west. In Asia the Greek colonists were subject to the Persian Empire, which then extended its rule over all Western Asia, and claimed dominion over Africa and Eastern Europe. The Greeks, fresh from the freedom of their native land, could not patiently endure the extortions of the Persian government, to which their own people submitted without question; hence conflicts arose which finally culminated in Persia taking complete possession of the Asiatic Greek cities....