Taxonomic Notes on Mexican Bats of the Genus Rhogeessa 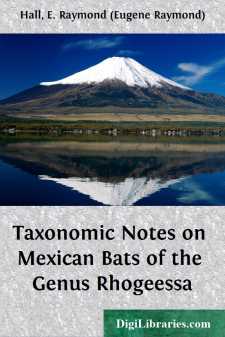 The three kinds of Rhogeëssa named from Mexico are as follows: R. parvula from the Tres Marias Islands off the west coast of Nayarit; R. tumida from Mirador, Veracruz, on the eastern slope of the Republic; and R. gracilis from Piaxtla, Puebla, on the southern end of the Mexican Plateau.

Of Rhogeëssa gracilis Miller (N. Amer. Fauna, 13:126, October 16, 1897) only three specimens are known; two are from Piaxtla, Puebla, and the third is from the Isthmus of Tehuantepec. Only the specimen from the Isthmus has a complete skull. The broken skull of the holotype is partly separated from the skin of the head and in such a manner as to reveal the teeth. The skull of the holotype seems to be broader (relative to its length) across the mastoids and posterior parts of the zygomata than in R. tumida or than in R. parvula. My comparisons indicate that Rhogeëssa gracilis has larger (longer and wider) ears than R. parvula and R. tumida and that it is specifically distinct from the two last mentioned kinds.

The two other nominal species from Mexico, R. parvula and R. tumida, were named and described by Harrison Allen (Proc. Acad. Nat. Sci. Philadelphia, 1866: 285 and 286, respectively) on the basis of three specimens in the United States National Museum. Two were from the Tres Marias Islands and were the basis of the name R. parvula; the third was from Mirador, Veracruz, and was the basis of the name R. tumida. These specimens seem to have been preserved in alcohol. I have examined the skulls of two of these. One (U.S.N.M., new number 37329, old number 7842) is alleged to be the paratype of R. parvula and the other (U.S.N.M., 84021) is alleged to be the holotype of R. tumida. In the glass vial containing skull No. 84021, there is a label in the handwriting of Gerrit S. Miller, Jr., bearing the following information: "In the orig. descr. the number of this sp. is said to be 8195. This is an error. Specimen catalogued 3.1.98 G.S.M. Jr." On the back of a second label in the skull vial there is written, "There is no doubt that this is the type skull. It was returned by H. A. with no. given in orig. descr. G.S.M. Jr." In the catalogue of the U. S. National Museum there is the statement that the type of Rhogeëssa tumida was collected by H. A. Grayson.

The name Rhogeëssa parvula was based on two specimens (Smithsonian Institution Nos. 7841 the type and 7842, in alcohol, collected by Col. Grayson in the Tres Marias Islands off the west coast of Mexico.) The type seems never to have been returned from the Academy of Sciences of Philadelphia to the U. S. National Museum in Washington, D. C., and cannot (in 1951) be found in Philadelphia or anywhere else. The skull, but no other part, of the second specimen is in the United States National Museum under the catalogue number 37329 (old No. 7842). The skull has been broken in two through the interorbital region but is glued together.

Of R. tumida, no additional specimen has been saved, so far as I know, from the type locality, Mirador, Veracruz....