Tales of the Argonauts 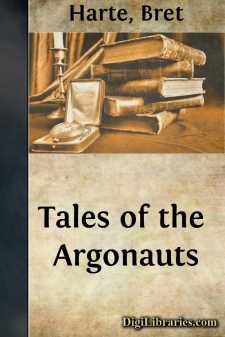 It was nearly two o'clock in the morning. The lights were out in Robinson's Hall, where there had been dancing and revelry; and the moon, riding high, painted the black windows with silver. The cavalcade, that an hour ago had shocked the sedate pines with song and laughter, were all dispersed. One enamoured swain had ridden east, another west, another north, another south; and the object of their adoration, left within her bower at Chemisal Ridge, was calmly going to bed.

I regret that I am not able to indicate the exact stage of that process. Two chairs were already filled with delicate inwrappings and white confusion; and the young lady herself, half-hidden in the silky threads of her yellow hair, had at one time borne a faint resemblance to a partly-husked ear of Indian corn. But she was now clothed in that one long, formless garment that makes all women equal; and the round shoulders and neat waist, that an hour ago had been so fatal to the peace of mind of Four Forks, had utterly disappeared. The face above it was very pretty: the foot below, albeit shapely, was not small. "The flowers, as a general thing, don't raise their heads MUCH to look after me," she had said with superb frankness to one of her lovers.

The expression of the "Rose" to-night was contentedly placid. She walked slowly to the window, and, making the smallest possible peephole through the curtain, looked out. The motionless figure of a horseman still lingered on the road, with an excess of devotion that only a coquette, or a woman very much in love, could tolerate. The "Rose," at that moment, was neither, and, after a reasonable pause, turned away, saying quite audibly that it was "too ridiculous for any thing." As she came back to her dressing-table, it was noticeable that she walked steadily and erect, without that slight affectation of lameness common to people with whom bare feet are only an episode. Indeed, it was only four years ago, that without shoes or stockings, a long-limbed, colty girl, in a waistless calico gown, she had leaped from the tailboard of her father's emigrant-wagon when it first drew up at Chemisal Ridge. Certain wild habits of the "Rose" had outlived transplanting and cultivation.

A knock at the door surprised her. In another moment she had leaped into bed, and with darkly-frowning eyes, from its secure recesses demanded "Who's there?"

An apologetic murmur on the other side of the door was the response.

There were further murmurs, affirmative, deprecatory, and persistent.

"Wait," said the "Rose." She got up, unlocked the door, leaped nimbly into bed again, and said, "Come."

The door opened timidly. The broad, stooping shoulders, and grizzled head, of a man past the middle age, appeared: after a moment's hesitation, a pair of large, diffident feet, shod with canvas slippers, concluded to follow. When the apparition was complete, it closed the door softly, and stood there,—a very shy ghost indeed,—with apparently more than the usual spiritual indisposition to begin a conversation....