Tacitus: The Histories, Volumes I and II 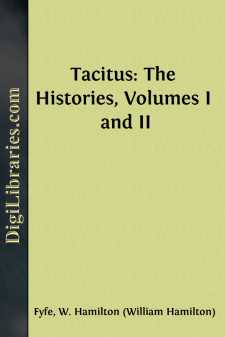 Tacitus held the consulship under Nerva in the year 97. At this point he closed his public career. He had reached the goal of a politician's ambition and had become known as one of the best speakers of his time, but he seems to have realized that under the Principate politics was a dull farce, and that oratory was of little value in a time of peace and strong government. The rest of his life was to be spent in writing history. In the year of his consulship or immediately after it, he published the Agricola and Germania, short monographs in which he practised the transition from the style of the speaker to that of the writer. In the preface to the Agricola he foreshadows the larger work on which he is engaged. 'I shall find it a pleasant task to put together, though in rough and unfinished style, a memorial of our former slavery and a record of our present happiness.' His intention was to write a history of the Principate from Augustus to Trajan. He began with his own times, and wrote in twelve or fourteen books a full account of the period from Nero's death in 68 a.d. to the death of Domitian in 96 a.d. These were published, probably in successive books, between 106 and 109 a.d. Only the first four and a half books survive to us. They deal with the years 69 and 70, and are known as The Histories. The Annals, which soon followed, dealt with the Julian dynasty after the death of Augustus. Of Augustus' constitution of the principate and of Rome's 'present happiness' under Trajan, Tacitus did not live to write.

The Histories, as they survive to us, describe in a style that has made them immortal one of the most terrible and crucial moments of Roman history. The deadly struggle for the throne demonstrated finally the real nature of the Principate—based not on constitutional fictions but on armed force—and the supple inefficiency of the senatorial class. The revolt on the Rhine foreshadowed the debacle of the fifth century. Tacitus was peculiarly well qualified to write the history of this period. He had been the eye-witness of some of the most terrible scenes: he was acquainted with all the distinguished survivors: his political experience gave him a statesman's point of view, and his rhetorical training a style which mirrored both the terror of the times and his own emotion. More than any other Roman historian he desired to tell the truth and was not fatally biassed by prejudice. It is wrong to regard Tacitus as an 'embittered rhetorician', an 'enemy of the Empire', a 'détracteur de l'humanité'. He was none of these. As a member of a noble, though not an ancient, family, and as one who had completed the republican cursus honorum, his sympathies were naturally senatorial. He regretted that the days were passed when oratory was a real power and the consuls were the twin towers of the world. But he never hoped to see such days again. He realized that monarchy was essential to peace, and that the price of freedom was violence and disorder. He had no illusions about the senate. Fault and misfortune had reduced them to nerveless servility, a luxury of self-abasement. Their meekness would never inherit the earth. Tacitus pours scorn on the philosophic opponents of the Principate, who while refusing to serve the emperor and pretending to hope for the restoration of the republic, could contribute nothing more useful than an ostentatious suicide. His own career, and still more the career of his father-in-law Agricola, showed that even under bad emperors a man could be great without dishonour. Tacitus was no republican in any sense of the word, but rather a monarchist malgré lui. There was nothing for it but to pray for good emperors and put up with bad ones.

Those who decry Tacitus for prejudice against the Empire forget that he is describing emperors who were indubitably bad. We have lost his account of Vespasian's reign. His praise of Augustus and of Trajan was never written. The emperors whom he depicts for us were all either tyrannical or contemptible, or both: no floods of modern biography can wash them white. They seemed to him to have degraded Roman life and left no room for virtus in the world. The verdict of Rome had gone against them. So he devotes to their portraiture the venom which the fifteen years of Domitian's reign of terror had engendered in his heart....