Taboo and Genetics A Study of the Biological, Sociological and Psychological Foundation of the Family 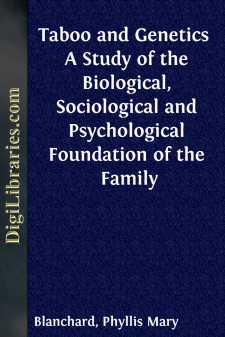 Add to My Favorites
Published: 9 years ago
Downloads: 141
Rating: (0 Votes)

CHAPTER I THE PROBLEM DEFINED What is sex? Asexual and mixed reproduction; Origin of sexual reproduction; Advantage of sex in chance of survival; Germ and body cells; Limitations of biology in social problems; Sex always present in higher animals; Sex in mammals; The sex problem in the human species; Application of laboratory method.

Sex, like all complicated phenomena, defies being crowded into a simple definition. In an animal or plant individual it is expressed by and linked with the ability to produce egg- or sperm-cells (ova or spermatozoa). Sexual reproduction is simply the chain of events following the union of the egg and sperm to produce a new individual. Looked at from another angle, it is that sort of reproduction which requires two differentiated individuals: the male, which produces spermatoza, and the female, which produces ova. In the case of very simple forms, it would be simply the union or conjugation of a male and a female individual and the reproductive process involved. Where there is no differentiation into male and female there is no sex.

An individual which produces both sperm-and egg-cells within its body is termed an hermaphrodite. Very few hermaphrodites exist among the vertebrates, although they may be found in one or two species (e.g., the hagfish). There are no truly hermaphroditic mammals, i.e., individuals in which both the male and the female germ cells function, except perhaps in rare instances.

Sexless or asexual reproduction assumes various forms. What is usually considered the most primitive of these is fission or simple division, in which the cell divides into two equal, identical parts. There is of course no suggestion of sex here. It is fairly safe to assume that life began thus in the world, as neuter or sexless—i.e., with no suggestion of either maleness or femaleness.

This asexual type of reproduction has been misinterpreted by a whole school of non-biological writers, who have followed the lead of Lester F. Ward, in his classification of these neuter-organisms as females. Ward says ("Pure Sociology," Ch. 14): "It does no violence to language or science to say that life begins with the female organism and is carried on a long distance by means of females alone. In all the different forms of asexual reproduction from fission to parthenogenesis, the female may in this sense be said to exist alone and perform all the functions of life including reproduction. In a word, life begins as female" (p. 313). Adding to this statement the assertion that the male developed at first as a mere parasite, in the actual, physical sense, Ward proceeds to build up his famous Gynæcocentric Theory, which is familiar to all students of social science, and need not be elaborated here. It is obvious that a thorough biological knowledge destroys the fundamental concept on which this theory is founded, for there is no doubt that life begins as neuter or sexless, and not as female.

There are a number of other forms of asexual reproduction, or the "vegetative type" (Abbott's term, which includes fission, budding, polysporogonia and simple spore formation)....