Sylph Etherege (From: "The Snow Image and Other Twice-Told Tales") 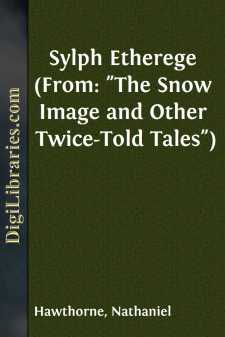 On a bright summer evening, two persons stood among the shrubbery of a garden, stealthily watching a young girl, who sat in the window seat of a neighboring mansion. One of these unseen observers, a gentleman, was youthful, and had an air of high breeding and refinement, and a face marked with intellect, though otherwise of unprepossessing aspect. His features wore even an ominous, though somewhat mirthful expression, while he pointed his long forefinger at the girl, and seemed to regard her as a creature completely within the scope of his influence.

"The charm works!" said he, in a low, but emphatic whisper.

"Do you know, Edward Hamilton,—since so you choose to be named,—do you know," said the lady beside him, "that I have almost a mind to break the spell at once? What if the lesson should prove too severe! True, if my ward could be thus laughed out of her fantastic nonsense, she might be the better for it through life. But then, she is such a delicate creature! And, besides, are you not ruining your own chance, by putting forward this shadow of a rival?"

"But will he not vanish into thin air, at my bidding?" rejoined Edward Hamilton. "Let the charm work!"

The girl's slender and sylph-like figure, tinged with radiance from the sunset clouds, and overhung with the rich drapery of the silken curtains, and set within the deep frame of the window, was a perfect picture; or, rather, it was like the original loveliness in a painter's fancy, from which the most finished picture is but an imperfect copy. Though her occupation excited so much interest in the two spectators, she was merely gazing at a miniature which she held in her hand, encased in white satin and red morocco; nor did there appear to be any other cause for the smile of mockery and malice with which Hamilton regarded her.

"The charm works!" muttered he, again. "Our pretty Sylvia's scorn will have a dear retribution!"

At this moment the girl raised her eyes, and, instead of a life-like semblance of the miniature, beheld the ill-omened shape of Edward Hamilton, who now stepped forth from his concealment in the shrubbery.

Sylvia Etherege was an orphan girl, who had spent her life, till within a few months past, under the guardianship, and in the secluded dwelling, of an old bachelor uncle. While yet in her cradle, she had been the destined bride of a cousin, who was no less passive in the betrothal than herself. Their future union had been projected, as the means of uniting two rich estates, and was rendered highly expedient, if not indispensable, by the testamentary dispositions of the parents on both sides. Edgar Vaughan, the promised bridegroom, had been bred from infancy in Europe, and had never seen the beautiful girl whose heart he was to claim as his inheritance. But already, for several years, a correspondence had been kept up between tine cousins, and had produced an intellectual intimacy, though it could but imperfectly acquaint them with each other's character.

Sylvia was shy, sensitive, and fanciful; and her guardian's secluded habits had shut her out from even so much of the world as is generally open to maidens of her age. She had been left to seek associates and friends for herself in the haunts of imagination, and to converse with them, sometimes in the language of dead poets, oftener in the poetry of her own mind. The companion whom she chiefly summoned up was the cousin with whose idea her earliest thoughts had been connected. She made a vision of Edgar Vaughan, and tinted it with stronger hues than a mere fancy-picture, yet graced it with so many bright and delicate perfections, that her cousin could nowhere have encountered so dangerous a rival....