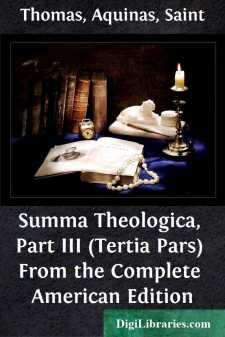 This electronic edition also differs from the Benziger Brothers edition in the following details (as well as the obvious lack of the original page numbers and headers):

* The repetitive expression "We proceed thus to the [next] Article" does not appear directly below the title of each article.

* Italics are represented by underscores at the beginning and end, like this. Quotations and other "quotable" matter, however, are ordinarily set off by quotation marks with no underscores in this edition, in accordance with common English usage, even where they were set in italics with no quotation marks in the Benziger Brothers edition. Titles of books are set off by underscores when they appear in the text with no parentheses, but not when the books are cited in parentheses.

* Bible chapters and verses are cited with arabic numerals separated by colons, like this: "Dan. 7:10"—not like this: "Dan. vii. 10." Small roman numerals have been retained where they appear in citations to books other than the Bible.

* Any matter that appeared in a footnote in the Benziger Brothers edition is presented in brackets at the point in the text where the footnote mark appeared.

* Paragraphs are not indented and are separated by blank lines.

* Numbered topics, set forth at the beginning of each question and at certain other places, are ordinarily presented on a separate line for each topic.

* Titles of questions are in all caps.

Anything else in this electronic edition that does not correspond to the content of the Benziger Brothers edition may be regarded as a defect in this edition and attributed to me (David McClamrock). _______________________