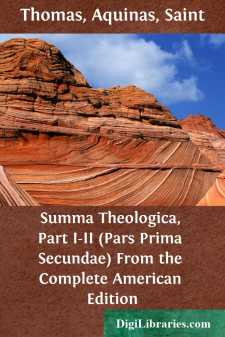 Whether It Belongs to Man to Act for an End?

Obj. 3: Further, then does a man seem to act for an end, when he acts deliberately. But man does many things without deliberation, sometimes not even thinking of what he is doing; for instance when one moves one's foot or hand, or scratches one's beard, while intent on something else. Therefore man does not do everything for an end.

On the contrary, All things contained in a genus are derived from the principle of that genus. Now the end is the principle in human operations, as the Philosopher states (Phys. ii, 9). Therefore it belongs to man to do everything for an end.

I answer that, Of actions done by man those alone are properly called "human," which are proper to man as man. Now man differs from irrational animals in this, that he is master of his actions. Wherefore those actions alone are properly called human, of which man is master. Now man is master of his actions through his reason and will; whence, too, the free-will is defined as "the faculty and will of reason." Therefore those actions are properly called human which proceed from a deliberate will. And if any other actions are found in man, they can be called actions "of a man," but not properly "human" actions, since they are not proper to man as man. Now it is clear that whatever actions proceed from a power, are caused by that power in accordance with the nature of its object. But the object of the will is the end and the good. Therefore all human actions must be for an end.

Reply Obj. 2: If any human action be the last end, it must be voluntary, else it would not be human, as stated above. Now an action is voluntary in one of two ways: first, because it is commanded by the will, e.g. to walk, or to speak; secondly, because it is elicited by the will, for instance the very act of willing. Now it is impossible for the very act elicited by the will to be the last end. For the object of the will is the end, just as the object of sight is color: wherefore just as the first visible cannot be the act of seeing, because every act of seeing is directed to a visible object; so the first appetible, i.e. the end, cannot be the very act of willing. Consequently it follows that if a human action be the last end, it must be an action commanded by the will: so that there, some action of man, at least the act of willing, is for the end....