Studies and Essays: Censorship and Art 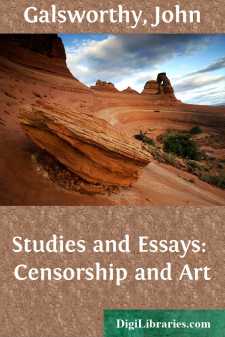 Since, time and again, it has been proved, in this country of free institutions, that the great majority of our fellow-countrymen consider the only Censorship that now obtains amongst us, namely the Censorship of Plays, a bulwark for the preservation of their comfort and sensibility against the spiritual researches and speculations of bolder and too active spirits—it has become time to consider whether we should not seriously extend a principle, so grateful to the majority, to all our institutions.

For no one can deny that in practice the Censorship of Drama works with a smooth swiftness—a lack of delay and friction unexampled in any public office. No troublesome publicity and tedious postponement for the purpose of appeal mar its efficiency. It is neither hampered by the Law nor by the slow process of popular election. Welcomed by the overwhelming majority of the public; objected to only by such persons as suffer from it, and a negligible faction, who, wedded pedantically to liberty of the subject, are resentful of summary powers vested in a single person responsible only to his own 'conscience'—it is amazingly, triumphantly, successful.

Why, then, in a democratic State, is so valuable a protector of the will, the interests, and pleasure of the majority not bestowed on other branches of the public being? Opponents of the Censorship of Plays have been led by the absence of such other Censorships to conclude that this Office is an archaic survival, persisting into times that have outgrown it. They have been known to allege that the reason of its survival is simply the fact that Dramatic Authors, whose reputation and means of livelihood it threatens, have ever been few in number and poorly organised—that the reason, in short, is the helplessness and weakness of the interests concerned. We must all combat with force such an aspersion on our Legislature. Can it even for a second be supposed that a State which gives trial by Jury to the meanest, poorest, most helpless of its citizens, and concedes to the greatest criminals the right of appeal, could have debarred a body of reputable men from the ordinary rights of citizenship for so cynical a reason as that their numbers were small, their interests unjoined, their protests feeble? Such a supposition were intolerable! We do not in this country deprive a class of citizens of their ordinary rights, we do not place their produce under the irresponsible control of one not amenable to Law, by any sort of political accident! That would indeed be to laugh at Justice in this Kingdom! That would indeed be cynical and unsound! We must never admit that there is no basic Justice controlling the edifice of our Civic Rights. We do, we must, conclude that a just and well-considered principle underlies this despotic Institution; for surely, else, it would not be suffered to survive for a single moment! Pom! Pom!

If, then, the Censorship of Plays be just, beneficent, and based on a well-considered principle, we must rightly inquire what good and logical reason there is for the absence of Censorship in other departments of the national life....