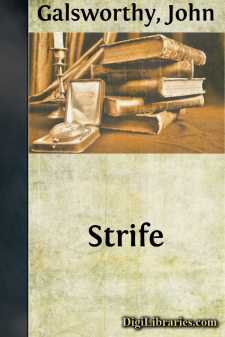 ACT I It is noon. In the Underwoods' dining-room a bright fire isburning. On one side of the fireplace are double-doors leadingto the drawing-room, on the other side a door leading to thehall. In the centre of the room a long dining-table without acloth is set out as a Board table. At the head of it, in theChairman's seat, sits JOHN ANTHONY, an old man, big,clean-shaven, and high-coloured, with thick white hair, and thickdark eyebrows. His movements are rather slow and feeble, but hiseyes are very much alive. There is a glass of water by his side.On his right sits his son EDGAR, an earnest-looking man of thirty,reading a newspaper. Next him WANKLIN, a man with juttingeyebrows, and silver-streaked light hair, is bending over transferpapers. TENCH, the Secretary, a short and rather humble, nervousman, with side whiskers, stands helping him. On WANKLIN'S rightsits UNDERWOOD, the Manager, a quiet man, with along, stiff jaw,and steady eyes. Back to the fire is SCANTLEBURY, a very large,pale, sleepy man, with grey hair, rather bald. Between him andthe Chairman are two empty chairs.

WILDER. [Who is lean, cadaverous, and complaining, with drooping grey moustaches, stands before the fire.] I say, this fire's the devil! Can I have a screen, Tench?

TENCH. Certainly, Mr. Wilder. [He looks at UNDERWOOD.] That is— perhaps the Manager—perhaps Mr. Underwood——

SCANTLEBURY. These fireplaces of yours, Underwood——

UNDERWOOD. [Roused from studying some papers.] A screen? Rather! I'm sorry. [He goes to the door with a little smile.] We're not accustomed to complaints of too much fire down here just now.

[He speaks as though he holds a pipe between his teeth, slowly,ironically.]

WILDER. It's their own fault, Scantlebury.

EDGAR. [Holding out his paper.] There's great distress among them, according to the Trenartha News.

WILDER. Oh, that rag! Give it to Wanklin. Suit his Radical views. They call us monsters, I suppose. The editor of that rubbish ought to be shot.

EDGAR. [Reading.] "If the Board of worthy gentlemen who control the Trenartha Tin Plate Works from their arm-chairs in London would condescend to come and see for themselves the conditions prevailing amongst their work-people during this strike——"

WILDER. Well, we have come.

EDGAR. [Continuing.] "We cannot believe that even their leg-of-mutton hearts would remain untouched."

[WANKLIN takes the paper from him.]

WILDER. Ruffian! I remember that fellow when he had n't a penny to his name; little snivel of a chap that's made his way by black-guarding everybody who takes a different view to himself.

[ANTHONY says something that is not heard.]

WILDER. What does your father say?

EDGAR. He says "The kettle and the pot."

[He sits down next to SCANTLEBURY.]

SCANTLEBURY. [Blowing out his cheeks.] I shall boil if I don't get that screen.

[UNDERWOOD and ENID enter with a screen, which they place beforethe fire....
Show more
Show less