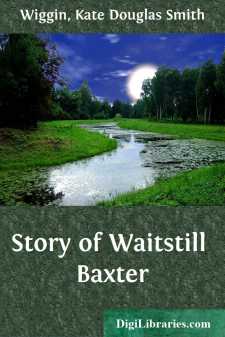 FAR, far up, in the bosom of New Hampshire's granite hills, the Saco has its birth. As the mountain rill gathers strength it takes

"Through Bartlett's vales its tuneful way,Or hides in Conway's fragrant brakes,Retreating from the glare of day."

Now it leaves the mountains and flows through "green Fryeburg's woods and farms." In the course of its frequent turns and twists and bends, it meets with many another stream, and sends it, fuller and stronger, along its rejoicing way. When it has journeyed more than a hundred miles and is nearing the ocean, it greets the Great Ossipee River and accepts its crystal tribute. Then, in its turn, the Little Ossipee joins forces, and the river, now a splendid stream, flows onward to Bonny Eagle, to Moderation and to Salmon Falls, where it dashes over the dam like a young Niagara and hurtles, in a foamy torrent, through the ragged defile cut between lofty banks of solid rock.

Widening out placidly for a moment's rest in the sunny reaches near Pleasant Point, it gathers itself for a new plunge at Union Falls, after which it speedily merges itself in the bay and is fresh water no more.

At one of the falls on the Saco, the two little hamlets of Edgewood and Riverboro nestle together at the bridge and make one village. The stream is a wonder of beauty just here; a mirror of placid loveliness above the dam, a tawny, roaring wonder at the fall, and a mad, white-flecked torrent as it dashes on its way to the ocean.

The river has seen strange sights in its time, though the history of these two tiny villages is quite unknown to the great world outside. They have been born, waxed strong, and fallen almost to decay while Saco Water has tumbled over the rocks and spent itself in its impetuous journey to the sea.

It remembers the yellow-moccasined Sokokis as they issued from the Indian Cellar and carried their birchen canoes along the wooded shore. It was in those years that the silver-skinned salmon leaped in its crystal depths; the otter and the beaver crept with sleek wet skins upon its shore; and the brown deer came down to quench his thirst at its brink while at twilight the stealthy forms of bear and panther and wolf were mirrored in its glassy surface.

Time sped; men chained the river's turbulent forces and ordered it to grind at the mill. Then houses and barns appeared along its banks, bridges were built, orchards planted, forests changed into farms, white-painted meetinghouses gleamed through the trees and distant bells rang from their steeples on quiet Sunday mornings.

All at once myriads of great hewn logs vexed its downward course, slender logs linked together in long rafts, and huge logs drifting down singly or in pairs. Men appeared, running hither and thither like ants, and going through mysterious operations the reason for which the river could never guess: but the mill-wheels turned, the great saws buzzed, the smoke from tavern chimneys rose in the air, and the rattle and clatter of stage-coaches resounded along the road....