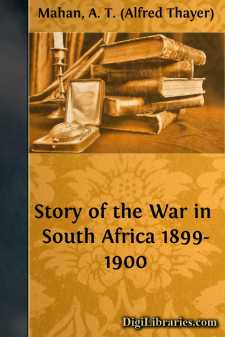 THE THEATRE OF THE WAR

The war in South Africa has been no exception to the general rule that the origin of current events is to be sought in the history of the past, and their present course to be understood by an appreciation of existing conditions, which decisively control it. This is especially true of the matter here before us; because the southern extreme of Africa, like to that of the American continent, has heretofore lain far outside of the common interest, and therefore of the accurate knowledge, of mankind at large. The Cape of Good Hope and Cape Horn, in themselves remote, tempestuous, and comparatively unproductive regions, for centuries derived importance merely from the fact that by those ways alone the European world found access to the shores of the Pacific and Indian Oceans. The application of steam to ocean navigation, and the opening of the Suez Canal, have greatly modified conditions, by diverting travel from the two Capes to the Canal and to the Straits of Magellan. It is only within a very few years that South Africa, thus diminished in consequence as a station upon a leading commercial highway, has received compensation by the discovery of great mineral wealth.

Thus separated from the rest of the world, by lack of intrinsic value as a region producing materials necessary to the common good, the isolation of South Africa was further increased by physical conditions, which not only retarded colonisation and development, but powerfully affected the character and the mutual relations of the European settlers. Portuguese mariners, after more than half a century of painful groping downward along the West African coast in search of a sea route to India that vague tradition asserted could there be found, in 1486 rounded the Cape of Good Hope, which then received the despondent name of the Cape of Storms from its first discoverer, Bartholomew Diaz.

Vasco da Gama, following him in 1497, gave to it its present auspicious title, which was to him of sound augury; for he then passed on to explore the East coast and to find the long-desired Indies. It was, however, the latter which constituted the Portuguese goal. Africa was to them primarily the half-way house, where to refresh their ships on the long voyage to Hindustan, which then took near a year to complete. For this purpose they established themselves on the island of Mozambique, and gradually took possession of the country to this day known as Portuguese East Africa.

From that far back settlement, Delagoa Bay, near the southern border, is now a thorn in the side of the British invasion; a port with which they are not at war, and therefore cannot seize or blockade, but which, through the supplies that thence reach the otherwise isolated Transvaal, contributes powerfully to support the defence.

Upon the heels of the Portuguese followed the Dutch, aiming like them at the Far East, more especially at what were then comprehensively called the Spice Islands—the Moluccas. They also felt the need of a half-way station....