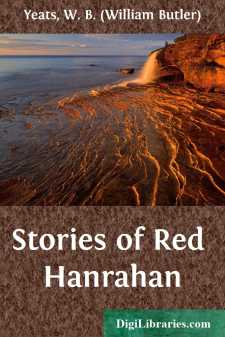 Hanrahan, the hedge schoolmaster, a tall, strong, red-haired young man, came into the barn where some of the men of the village were sitting on Samhain Eve. It had been a dwelling-house, and when the man that owned it had built a better one, he had put the two rooms together, and kept it for a place to store one thing or another. There was a fire on the old hearth, and there were dip candles stuck in bottles, and there was a black quart bottle upon some boards that had been put across two barrels to make a table. Most of the men were sitting beside the fire, and one of them was singing a long wandering song, about a Munster man and a Connaught man that were quarrelling about their two provinces.

Hanrahan went to the man of the house and said, 'I got your message'; but when he had said that, he stopped, for an old mountainy man that had a shirt and trousers of unbleached flannel, and that was sitting by himself near the door, was looking at him, and moving an old pack of cards about in his hands and muttering. 'Don't mind him,' said the man of the house; 'he is only some stranger came in awhile ago, and we bade him welcome, it being Samhain night, but I think he is not in his right wits. Listen to him now and you will hear what he is saying.'

They listened then, and they could hear the old man muttering to himself as he turned the cards, 'Spades and Diamonds, Courage and Power; Clubs and Hearts, Knowledge and Pleasure.'

'That is the kind of talk he has been going on with for the last hour,' said the man of the house, and Hanrahan turned his eyes from the old man as if he did not like to be looking at him.

'I got your message,' Hanrahan said then; '"he is in the barn with his three first cousins from Kilchriest," the messenger said, "and there are some of the neighbours with them."'

'It is my cousin over there is wanting to see you,' said the man of the house, and he called over a young frieze-coated man, who was listening to the song, and said, 'This is Red Hanrahan you have the message for.'

'It is a kind message, indeed,' said the young man, 'for it comes from your sweetheart, Mary Lavelle.'

'How would you get a message from her, and what do you know of her?'

'I don't know her, indeed, but I was in Loughrea yesterday, and a neighbour of hers that had some dealings with me was saying that she bade him send you word, if he met any one from this side in the market, that her mother has died from her, and if you have a mind yet to join with herself, she is willing to keep her word to you.'

'I will go to her indeed,' said Hanrahan.

'And she bade you make no delay, for if she has not a man in the house before the month is out, it is likely the little bit of land will be given to another.'

When Hanrahan heard that, he rose up from the bench he had sat down on. 'I will make no delay indeed,' he said, 'there is a full moon, and if I get as far as Gilchreist to-night, I will reach to her before the setting of the sun to-morrow.'

When the others heard that, they began to laugh at him for being in such haste to go to his sweetheart, and one asked him if he would leave his school in the old lime-kiln, where he was giving the children such good learning....