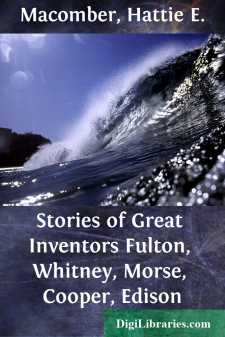 This story is about a giant.

Do you believe in them?

He peeps out of your coffee cup in the morning.

He cheers you upon a cold day in winter.

But the boys and girls were not so well acquainted with him a hundred years ago.

About that long ago, far to the north and east, a queer boy lived.

He sat in his grandmother's kitchen many an hour, watching the tea-kettle.

He seemed to be idle.

But he was really very busy.

He was talking very earnestly to the giant.

The giant was a prisoner.

No one knew how to free him.

Many had often tried to do this and failed.

He was almost always invisible.

But when he did appear, it was in the form of a very old man.

This old man had long, white hair, and a beard which seemed to enwrap him like a cloak—a cloak as white as snow.

So his name is The White Giant.

The boy's name was James Watt.

He lived in far-away Scotland.

He sat long, listening to the White Giant as he told him many wonderful things.

The way in which the giant first showed himself to James was very strange.

James noticed that the lid of the tea-kettle was acting very strangely.

It rose and fell, fluttered and danced.

Now, James had lived all his life among people who believed in witches and fairies.

So he was watching for them.

And he thought there was somebody in the kettle trying to get out.

So he said, "Who are you and what do you want?"

"Space, freedom, and something to do," cried the giant.

"If you will only let me out, I'll work hard for you.

I'll draw your carriages and ships.

I'll lift all your weights.

I'll turn all the wheels of your factories.

I'll be your servant always, in a thousand other ways."

If you have now guessed the common name of this giant, we will call him Steam.

At the time James Watt lived, there were no steam boats, steam mills, nor railways.

And this boy, though his grandmother scolded, thought much about the giant in the tea-kettle.

And he became the inventor of the first steam engine that was of any use to the world.

So, little by little, people came to know that steam is a great, good giant.

They tried in many different ways to make him useful.

They wished very much to make him run a boat.

One man tried to run his boat in a queer way.

He made something like a duck's foot to push it through the water.

Another moved his boat by forcing a stream of water in at the bow and out at the stern.

He made his engine run a number of oars so as to paddle the boat forward.

People laughed at him.

But he said, "When I shall be forgotten, steam boats will run up the rivers and across the seas."

Then people laughed the harder and called him "a crank."

Now, in 1765, there happened a good thing for this old world.

A little baby boy was born in that year.

Perhaps you wonder why it was such a good thing for the world.

Some of you will know why when you read that this baby's name was Robert Fulton....