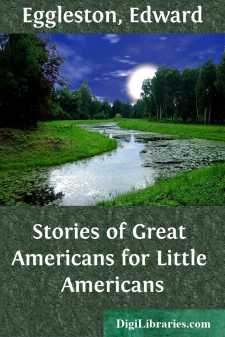 [Illustration: THE FIRST GOVERNOR IN BOSTON]

Before the white people came, there were no houses in this country but the little huts of the In-di-ans. The In-di-an houses were made of bark, or mats, or skins, spread over poles.

Some people came to one part of the country. Others started set-tle-ments in other places. When more people came, some of these set-tle-ments grew into towns. The woods were cut down. Farms were planted. Roads were made. But it took many years for the country to fill with people.

The first white people that came to live in the woods where Boston isnow, settled there a long time ago. They had a gov-ern-or over them.He was a good man, and did much for the people. His name was JohnWin-throp.

The first thing the people had to do was to cut down the trees. After that they could plant corn. But at first they could not raise any-thing to eat. They had brought flour and oat-meal from England. But they found that it was not enough to last till they could raise corn on their new ground.

Win-throp sent a ship to get more food for them. The ship was gone a long time. The people ate up all their food. They were hungry. They went to the sea-shore, and found clams and mussels. They were glad to get these to eat.

At last they set a day for every-body to fast and pray for food. The gov-ern-or had a little flour left. Nearly all of this was made into bread, and put into the oven to bake. He did not know when he would get any more.

Soon after this a poor man came along. His flour was all gone. His bread had all been eaten up. His family were hungry. The gov-ern-or gave the poor man the very last flour that he had in the barrel.

Just then a ship was seen. It sailed up toward Boston. It was loaded with food for all the people.

The time for the fast day came. But there was now plenty of food. The fast day was turned into a thanks-giving day.

One day a man sent a very cross letter to Gov-ern-or Win-throp. Win-throp sent it back to him. He said, "I cannot keep a letter that might make me angry." Then the man that had written the cross letter wrote to Win-throp, "By con-quer-ing yourself, you have con-quered me."

The first white men to go into the middle of our country were French-men. The French had settled in Can-a-da. They sent mis-sion-a-ries to preach to the Indians in the West. They also sent traders to buy furs from the Indians.

The French-men heard the Indians talk about a great river in the West.But no French-man had ever gone far enough to see the Mis-sis-sip-pi.

Mar-quette was a priest. Jo-li-et was a trader. These two men were sent to find the great river that the Indians talked about.

The friendly Indians in Wis-con-sin tried to per-suade them not to go....