Stories of Achievement, Volume III (of 6) Orators and Reformers 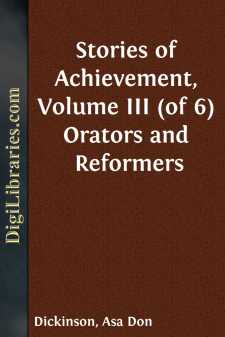 Modern critics are fond of discriminating between talent and genius. The fire of genius, it seems, will flame resplendent even in spite of an unworthy possessor's neglect. But the man with talent which must be carefully cherished and increased if he would attain distinction by its help—that man is the true self-helper to whom our hearts go out in sympathy. Every schoolboy knows that Demosthenes practised declamation on the seashore, with his mouth full of pebbles. This description of the unlovely old Athenian with the compelling tongue is Plutarch's contribution to the literature of self-help.

From Plutarch's "Lives of Illustrious Men."

The orator Callistratus was to plead in the cause which the city of Oropus had depending; and the expectation of the public was greatly raised, both by the powers of the orator, which were then in the highest repute, and by the importance of the trial. Demosthenes, hearing the governors and tutors agree among themselves to attend the trial, with much importunity prevailed on his master to take him to hear the pleadings. The master, having some acquaintance with the officers who opened the court, got his young pupil a seat where he could hear the orators without being seen. Callistratus had great success, and his abilities were extremely admired. Demosthenes was fired with a spirit of emulation. When he saw with what distinction the orator was conducted home, and complimented by the people, he was struck still more with the power of that commanding eloquence which could carry all before it. From this time, therefore, he bade adieu to the other studies and exercises in which boys are engaged, and applied himself with great assiduity to declaiming, in hopes of being one day numbered among the orators. Isaeus was the man he made use of as his preceptor in eloquence, though Isocrates then taught it; whether it was that the loss of his father incapacitated him to pay the sum of ten minae, which was that rhetorician's usual price, or whether he preferred the keen and subtle manner of Isaeus as more fit for public use.

Hermippus says he met with an account in certain anonymous memoirs that Demosthenes likewise studied under Plato, and received great assistance from him in preparing to speak in public. He adds, that Ctesibius used to say that Demosthenes was privately supplied by Callias the Syracusan and some others, with the systems of rhetoric taught by Isocrates and Alcidamus, and made his advantage of them.

When his minority was expired, he called his guardians to account at law, and wrote orations against them. As they found many methods of chicane and delay, he had great opportunity, as Thucydides says, to exercise his talent for the bar. It was not without much pain and some risk that he gained his cause; and, at last, it was but a very small part of his patrimony that he could recover. By this means, however, he acquired a proper assurance and some experience; and having tasted the honour and power that go in the train of eloquence, he attempted to speak in the public debates, and take a share in the administration....