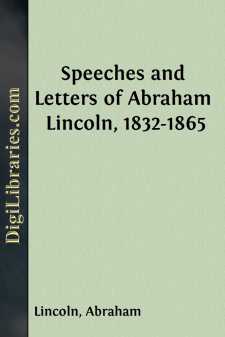 No man since Washington has become to Americans so familiar or so beloved a figure as Abraham Lincoln. He is to them the representative and typical American, the man who best embodies the political ideals of the nation. He is typical in the fact that he sprang from the masses of the people, that he remained through his whole career a man of the people, that his chief desire was to be in accord with the beliefs and wishes of the people, that he never failed to trust in the people and to rely on their support. Every native American knows his life and his speeches. His anecdotes and witticisms have passed into the thought and the conversation of the whole nation as those of no other statesman have done.

He belongs, however, not only to the United States, but to the whole of civilized mankind. It is no exaggeration to say that he has, within the last thirty years, grown to be a conspicuous figure in the history of the modern world. Without him, the course of events not only in the Western hemisphere but in Europe also would have been different, for he was called to guide at the greatest crisis of its fate a State already mighty, and now far more mighty than in his days, and the guidance he gave has affected the march of events ever since. A life and a character such as his ought to be known to and comprehended by Europeans as well as by Americans. Among Europeans, it is especially Englishmen who ought to appreciate him and understand the significance of his life, for he came of an English stock, he spoke the English tongue, his action told upon the progress of events and the shaping of opinion in all British communities everywhere more than it has done upon any other nation outside America itself.

This collection of Lincoln's speeches seeks to make him known by his words as readers of history know him by his deeds. In popularly-governed countries the great statesman is almost of necessity an orator, though his eminence as a speaker may be no true measure either of his momentary power or of his permanent fame, for wisdom, courage and tact bear little direct relation to the gift for speech. But whether that gift be present in greater or in lesser degree, the character and ideas of a statesman are best studied through his own words. This is particularly true of Lincoln, because he was not what may be called a professional orator. There have been famous orators whose speeches we may read for the beauty of their language or for the wealth of ideas they contain, with comparatively little regard to the circumstances of time and place that led to their being delivered. Lincoln is not one of these. His speeches need to be studied in close relation to the occasions which called them forth. They are not philosophical lucubrations or brilliant displays of rhetoric. They are a part of his life. They are the expression of his convictions, and derive no small part of their weight and dignity from the fact that they deal with grave and urgent questions, and express the spirit in which he approached those questions....