Slave Narratives: a Folk History of Slavery in the United States From Interviews with Former Slaves Mississippi Narratives 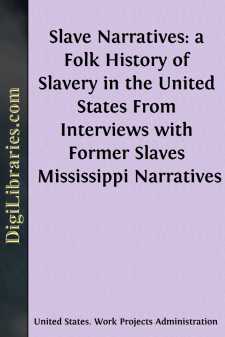 Jim Allen, West Point, age 87, lives in a shack furnished by the city. With him lives his second wife, a much older woman. Both he and his wife have a reputation for being "queer" and do not welcome outside visitors. However, he readily gave an interview and seemed most willing to relate the story of his life.

"I was born in Russell County, Alabamy, an' can tell you 'bout my own mammy an' pappy an' sisters an' brudders.

"Mammy's name was Darkis an' her Marster was John Bussey, a reg'lar old drunkard, an' my pappy's name was John Robertson an' b'longed to Dr. Robertson, a big farmer on Tombigbee river, five miles east of Columbus. De doctor hisself lived in Columbus.

"My sister Harriett and brudder John was fine fiel' hands an' Marster kep' 'em in de fiel' most of de time, tryin' to dodge other white folks.

"Den dere was Sister Vice an' brudder George. Befo' I could 'member much, I 'members Lee King had a saloon close to Bob Allen's store in Russell County, Alabama, and Marse John Bussey drunk my mammy up. I means by dat, Lee King tuk her an' my brudder George fer a whiskey debt. Yes, old Marster drinked dem up. Den dey was car'ied to Florida by Sam Oneal, an' George was jes a baby. You know, de white folks wouldn't often sep'rate de mammy an' baby. I ain't seen' em since.

"Did we have good eatins? Yes ma'm, old Marster fed me so good, fer I was his pet. He never 'lowed no one to pester me neither. Now dis Marster was Bob Allen who had tuk me for a whiskey debt, too. Marse Bussey couldn't pay, an' so Marse Allen tuk me, a little boy, out'n de yard whar I was playin' marbles. De law 'lowed de fust thing de man saw, he could take.

"I served Marse Bob Allen 'til Gen'al Grant come 'long and had me an' some others to follow him to Miss'sippi. We was in de woods hidin' de mules an' a fine mare. Dis was after Emanc'pation, an' Gen'al Grant was comin' to Miss'sippi to tell de niggers dey was free.

"As I done tol' you, I was Marse Allen's pet nigger boy. I was called a stray. I slep' on de flo' by old Miss an' Marse Bob. I could'a slep' on de trun'le bed, but it was so easy jes to roll over an' blow dem ashes an' mek dat fire burn.

"Ole Miss was so good, I'd do anything fer her. She was so good an' weighed' round 200 poun's. She was Marse Bob's secon' wife. Nobody 'posed on me, No, Sir! I car'ied water to Marse Bob's sto' close by an' he would allus give me candy by de double han'full, an' as many juice harps as I wanted. De bes' thing I ever did eat was dat candy. Marster was good to his only stray nigger.

"Slave niggers didn't fare wid no gardens 'cept de big garden up at de Big House, when fiel' han's was called to wuk out hers (old Miss). All de niggers had a sight of good things to eat from dat garden an' smoke house.