Sketches from Memory (From: "The Doliver Romance and Other Pieces: Tales and Sketches") 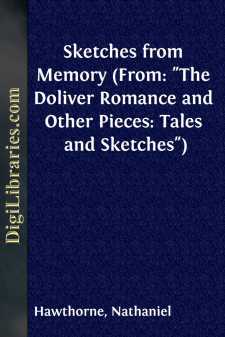 I. THE INLAND PORT.

It was a bright forenoon, when I set foot on the beach at Burlington, and took leave of the two boatmen in whose little skiff I had voyaged since daylight from Peru. Not that we had come that morning from South America, but only from the New York shore of Lake Champlain. The highlands of the coast behind us stretched north and south, in a double range of bold, blue peaks, gazing over each other's shoulders at the Green Mountains of Vermont.

The latter are far the loftiest, and, from the opposite side of the lake, had displayed a more striking outline. We were now almost at their feet, and could see only a sandy beach sweeping beneath a woody bank, around the semicircular Bay of Burlington.

The painted lighthouse on a small green island, the wharves and warehouses, with sloops and schooners moored alongside, or at anchor, or spreading their canvas to the wind, and boats rowing from point to point, reminded me of some fishing-town on the sea-coast.

But I had no need of tasting the water to convince myself that Lake Champlain was not all arm of the sea; its quality was evident, both by its silvery surface, when unruffled, and a faint but unpleasant and sickly smell, forever steaming up in the sunshine. One breeze of the Atlantic with its briny fragrance would be worth more to these inland people than all the perfumes of Arabia. On closer inspection the vessels at the wharves looked hardly seaworthy,—there being a great lack of tar about the seams and rigging, and perhaps other deficiencies, quite as much to the purpose.

I observed not a single sailor in the port. There were men, indeed, in blue jackets and trousers, but not of the true nautical fashion, such as dangle before slopshops; others wore tight pantaloons and coats preponderously long-tailed,—cutting very queer figures at the masthead; and, in short, these fresh-water fellows had about the same analogy to the real "old salt" with his tarpaulin, pea-jacket, and sailor-cloth trousers, as a lake fish to a Newfoundland cod.

Nothing struck me more in Burlington, than the great number of Irish emigrants. They have filled the British Provinces to the brim, and still continue to ascend the St. Lawrence in infinite tribes overflowing by every outlet into the States. At Burlington, they swarm in huts and mean dwellings near the lake, lounge about the wharves, and elbow the native citizens entirely out of competition in their own line. Every species of mere bodily labor is the prerogative of these Irish. Such is their multitude in comparison with any possible demand for their services, that it is difficult to conceive how a third part of them should earn even a daily glass of whiskey, which is doubtless their first necessary of life,—daily bread being only the second.

Some were angling in the lake, but had caught only a few perch, which little fishes, without a miracle, would be nothing among so many. A miracle there certainly must have been, and a daily one, for the subsistence of these wandering hordes....