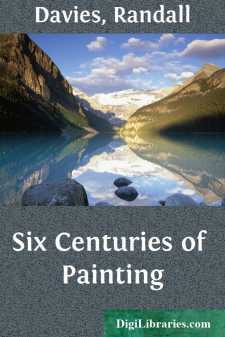 So far as it concerns pictures painted upon panel or canvas in tempera or oils, the history of painting begins with Cimabue, who worked in Florence during the latter half of the thirteenth century. That the art was practised in much earlier times may readily be admitted, and the life-like portraits in the vestibule at the National Gallery taken from Greek tombs of the second or third century are sufficient proofs of it; but for the origin of painting as we are now generally accustomed to understand the term we need go no further back than to Cimabue and his contemporaries, from whose time the art has uninterruptedly developed throughout Europe until the present day.

Oddly enough it is to the Christian Church, whose early fathers put their heaviest ban upon all forms of art, that this development is almost wholly due. The reaction against paganism began to die out when the Christian religion was more firmly established, and representations of Christ and the Saints executed in mosaic became more and more to be regarded as a necessary, or at any rate a regular embellishment of the numerous churches which were built. For these mosaics panel paintings began in time to be substituted; but it was long before any of the human feeling of art was to be found in them. The influence of S. Francis of Assisi was needed to prepare the way, and it was only towards the close of the thirteenth century that the breath of life began to be infused into these conventional representations, and painting became a living art.

As it had begun in Italy, under the auspices of the Church, so it chiefly developed in that country; at first in Florence and Siena, later in Rome, whither its greatest masters were summoned by the Pope, and in Venice, where, farther from the ecclesiastical influence, it flourished more exuberantly, and so became more capable of being transplanted to other countries. In Germany, however, and the Low Countries it had appeared early enough to be considered almost as an independent growth, though not till considerably later were the northern schools capable of sustaining the reputation given them by the Van Eycks and Roger Van der Weyden.

But for the effects of the Renaissance in Italy in the fifteenth century it is questionable whether painting would ever have spread as it did in the sixteenth and seventeenth to Spain and France. But by the close of the fifteenth century such enormous progress had been made by the Italian painters towards the realisation of human action and emotion in pictures, that from being merely an accessory of religious establishments, painting had become as much a part of the recognised means of intellectual enjoyment of everyday life as music, sculpture, or even the refinements of food and clothing.

Portraiture, in particular, had gradually advanced to a foremost place in painting. Originally it was used exclusively for memorials of the dead—as we have seen in the case of the paintings from the Greek tombs—and on coins and medals....