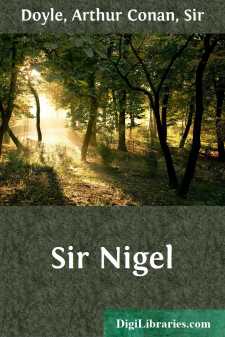 Dame History is so austere a lady that if one, has been so ill-advised as to take a liberty with her, one should hasten to make amends by repentance and confession. Events have been transposed to the extent of some few months in this narrative in order to preserve the continuity and evenness of the story. I hope so small a divergence may seem a venial error after so many centuries. For the rest, it is as accurate as a good deal of research and hard work could make it.

The matter of diction is always a question of taste and discretion in a historical reproduction. In the year 1350 the upper classes still spoke Norman-French, though they were just beginning to condescend to English. The lower classes spoke the English of the original Piers Plowman text, which would be considerably more obscure than their superiors' French if the two were now reproduced or imitated. The most which the chronicles can do is to catch the cadence and style of their talk, and to infuse here and there such a dash of the archaic as may indicate their fashion of speech.

I am aware that there are incidents which may strike the modern reader as brutal and repellent. It is useless, however, to draw the Twentieth Century and label it the Fourteenth. It was a sterner age, and men's code of morality, especially in matters of cruelty, was very different. There is no incident in the text for which very good warrant may not be given. The fantastic graces of Chivalry lay upon the surface of life, but beneath it was a half-savage population, fierce and animal, with little ruth or mercy. It was a raw, rude England, full of elemental passions, and redeemed only by elemental virtues. Such I have tried to draw it.

For good or bad, many books have gone to the building of this one. I look round my study table and I survey those which lie with me at the moment, before I happily disperse them forever. I see La Croix's "Middle Ages," Oman's "Art of War," Rietstap's "Armorial General," De la Borderie's "Histoire de Bretagne," Dame Berner's "Boke of St. Albans," "The Chronicle of Jocelyn of Brokeland," "The Old Road," Hewitt's "Ancient Armour," Coussan's "Heraldry," Boutell's "Arms," Browne's "Chaucer's England," Cust's "Scenes of the Middle Ages," Husserand's "Wayfaring Life," Ward's "Canterbury Pilgrims;" Cornish's "Chivalry," Hastings' "British Archer," Strutt's "Sports," Johnes Froissart, Hargrove's "Archery," Longman's "Edward III," Wright's "Domestic Manners." With these and many others I have lived for months. If I have been unable to combine and transfer their effect, the fault is mine.

I. THE HOUSE OF LORING

In the month of July of the year 1348, between the feasts of St. Benedict and of St. Swithin, a strange thing came upon England, for out of the east there drifted a monstrous cloud, purple and piled, heavy with evil, climbing slowly up the hushed heaven. In the shadow of that strange cloud the leaves drooped in the trees, the birds ceased their calling, and the cattle and the sheep gathered cowering under the hedges....