Sights from a Steeple (From "Twice Told Tales") 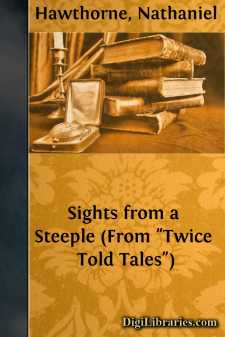 O! I have climbed high, and my reward is small. Here I stand, with wearied knees, earth, indeed, at a dizzy depth below, but heaven far, far beyond me still. O that I could soar up into the very zenith, where man never breathed, nor eagle ever flew, and where the ethereal azure melts away from the eye, and appears only a deepened shade of nothingness! And yet I shiver at that cold and solitary thought. What clouds are gathering in the golden west, with direful intent against the brightness and the warmth of this dimmer afternoon! They are ponderous air-ships, black as death, and freighted with the tempest; and at intervals their thunder, the signal-guns of that unearthly squadron, rolls distant along the deep of heaven. These nearer heaps of fleecy vapor—methinks I could roll and toss upon them the whole day long!—seem scattered here and there, for the repose of tired pilgrims through the sky. Perhaps—for who can tell?—beautiful spirits are disporting themselves there, and will bless my mortal eye with the brief appearance of their curly locks of golden light, and laughing faces, fair and faint as the people of a rosy dream. Or, where the floating mass so imperfectly obstructs the color of the firmament, a slender foot and fairy limb, resting too heavily upon the frail support, may be thrust through, and suddenly withdrawn, while longing fancy follows them in vain. Yonder again is an airy archipelago, where the sunbeams love to linger in their journeyings through space. Every one of those little clouds has been dipped and steeped in radiance, which the slightest pressure might disengage in silvery profusion, like water wrung from a sea-maid's hair. Bright they are as a young man's visions, and, like them, would be realized in chillness, obscurity, and tears. I will look on them no more.

In three parts of the visible circle, whose centre is this spire, I discern cultivated fields, villages, white country-seats, the waving lines of rivulets, little placid lakes, and here and there a rising ground, that would fain be termed a hill. On the fourth side is the sea, stretching away towards a viewless boundary, blue and calm, except where the passing anger of a shadow flits across its surface, and is gone. Hitherward, a broad inlet penetrates far into the land; on the verge of the harbor, formed by its extremity, is a town; and over it am I, a watchman, all-heeding and unheeded. O that the multitude of chimneys could speak, like those of Madrid, and betray, in smoky whispers, the secrets of all who, since their first foundation, have assembled at the hearths within! O that the Limping Devil of Le Sage would perch beside me here, extend his wand over this contiguity of roofs, uncover every chamber, and make me familiar with their inhabitants! The most desirable mode of existence might be that of a spiritualized Paul Pry hovering invisible round man and woman, witnessing their deeds, searching into their hearts, borrowing brightness from their felicity, and shade from their sorrow, and retaining no emotion peculiar to himself. But none of these things are possible; and if I would know interior of brick walls, or the mystery of human bosoms, I can but guess.

Yonder is a fair street, extending north and south. The stately mansions are placed each on its carpet of verdant grass, and a long flight of steps descends from every door to the pavement. Ornamental trees—the broad-leafed horse-chestnut, the elm so lofty and bending, the graceful but infrequent willow, and others whereof I know not the names—grow thrivingly among brick and stone. The oblique rays of the sun are intercepted by these green citizens, and by the houses, so that one side of the street is a shaded and pleasant walk. On its whole extent there is now but a single passenger, advancing from the upper end; and be, unless distance and the medium of a pocket spyglass do him more than justice, is a fine young man of twenty. He saunters slowly forward, slapping his left hand with his folded gloves, bending his eyes upon the pavement, and sometimes raising them to throw a glance before him. Certainly, he has a pensive air. Is he in doubt, or in debt? Is he, if the question be allowable, in love? Does he strive to be melancholy and gentlemanlike? Or, is he merely overcome by the heat? But I bid him farewell, for the present. The door of one of the houses—an aristocratic edifice, with curtains of purple and gold waving from the windows—is now opened, and down the steps come two ladies, swinging their parasols, and lightly arrayed for a summer ramble. Both are young, both are pretty; but methinks the left-hand lass is the fairer of the twain; and, though she be so serious at this moment, I could swear that there is a treasure of gentle fun within her. They stand talking a little while upon the steps, and finally proceed up the street....