Sidonia, the Sorceress : the Supposed Destroyer of the Whole Reigning Ducal House of Pomerania - Volume 2 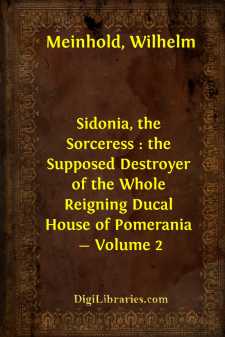 How Dorothea Stettin is talked out of the sub-prioret by Sidonia, and the priest is prohibited from visiting the convent.

If Sidonia could not be the pastor's wife, she was determined at least to be sub-prioress, and commenced her preparations for this object by knitting a little pair of red hose for her cat. Then she sent for Dorothea Stettin, saying that she was weak and ill, and no one took pity on her.

When the good Dorothea came as she was asked, there lay my serpent on the bed in her nun's robes, groaning and moaning as if her last hour had come; and scarcely had the sub-prioress taken a seat near her, when my cat crept forth from under the bed, in his little red hose, mewing and rubbing himself up against the robe of the sub-prioress, as if praying her to remove this unwonted constraint from him, of the little red hose.

After Dorothea had inquired about her sickness, she looked at the cat, and asked wonderingly, what was the meaning of such a strange dress?

Illa.—"Ah, dear friend, it was dreadful to my feelings to see the little animal going about naked, therefore I knit little hose for him, as you see; indeed, I am often tempted to wonder how the Lord God could permit the poor animals to appear naked before us."

Hæc (extending her arms for joy, so that she almost tumbled back off the stool).—"Oh, God be praised and thanked, at last I have found one chaste soul in this wicked world! (sobs, throws up her eyes, falls upon Sidonia's neck, kisses her, and weeps over her:) ah yes, one chaste soul at last, like herself!"

Illa.—"True, Dorothea, there is no virtue so rare in this evil world as chastity. Ah, why has the Lord God placed such things before our eyes? I never can comprehend it, and never will. What a sight for a chaste virgin these naked animals! What did the dear sister think on the matter?"

Hæc.—"Ah, she knew not what to think, had asked the priest about it."

Hæc.—"Eh? she was too hard on the good priest. He was a pure and upright servant of God."

Illa.—"Ay, as Judas was. Had not sister Dorothea heard——"

Hæc.—"No; for God's sake, what? The dear sister frightened her already."

Illa.—"First, you confess that the priest laughed when you talked about chastity?"

Illa.—"Then you remember that he preached a sermon lately upon adul—upon adul—. No, she never could utter the word—the horrible word. Upon the seventh commandment, to the great scandal of the entire convent?"

Hæc.—"Ah yes, ah yes, she was there, and had to stop one ear with her finger, the other with her kerchief, not to hear all the strange and dreadful things he was saying."

Illa.—"And yet this was the man that ran in and out of the cloister daily at his pleasure, sent for or not—a young unmarried man—though the convent rules especially declared an old man. Ah, if she were sub-prioress, this scandal should never be permitted."

Hæc.—"What could be done? it was a blessed thing to live in peace. Besides, the priest was such a pious man."