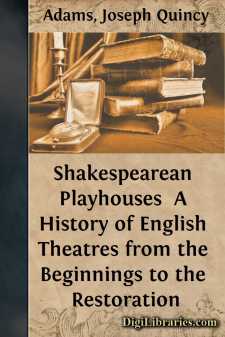 BEFORE the building of regular playhouses the itinerant troupes of actors were accustomed, except when received into private homes, to give their performances in any place that chance provided, such as open street-squares, barns, town-halls, moot-courts, schoolhouses, churches, and—most frequently of all, perhaps—the yards of inns. These yards, especially those of carriers' inns, were admirably suited to dramatic representations, consisting as they did of a large open court surrounded by two or more galleries. Many examples of such inn-yards are still to be seen in various parts of England; a of the famous White Hart, in Southwark, is given opposite page by way of illustration. In the yard a temporary platform—a few boards, it may be, set on barrel-heads—could be erected for a stage; in the adjacent stables a dressing-room could be provided for the actors; the rabble—always the larger and more enthusiastic part of the audience—could be accommodated with standing-room about the stage; while the more aristocratic members of the audience could be comfortably seated in the galleries overhead. Thus a ready-made and very serviceable theatre was always at the command of the players; and it seems to have been frequently made use of from the very beginning of professionalism in acting.

One of the earliest extant moralities, Mankind, acted by strollers in the latter half of the fifteenth century, gives us an interesting glimpse of an inn-yard performance. The opening speech makes distinct reference to the two classes of the audience described above as occupying the galleries and the yard:

O ye sovereigns that sit, and ye brothers that stand right up.

The "brothers," indeed, seem to have stood up so closely about the stage that the actors had great difficulty in passing to and from their dressing-room. Thus, Nowadays leaves the stage with the request:

New Gyse enters with the threat:

Out of my way, sirs, for dread of a beating!

While Nought, with even less respect, shouts:

Avaunt, knaves! Let me go by!

This problem they met by taking advantage of the most thrilling moment of the plot. The Vice and his wicked though jolly companions, having wholly failed to overcome the hero, Mankind, decide to call to their assistance no less a person than the great Devil himself; and accordingly they summon him with a "Walsingham wystyle." Immediately he roars in the dressing-room, and shouts:

I come, with my legs under me!

There is a flash of powder, and an explosion of fireworks, while the eager spectators crane their necks to view the entrance of this "abhomynabull" personage....