Septimius Felton, or, the Elixir of Life 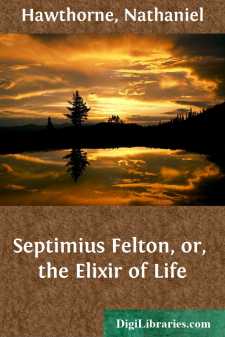 The existence of this story, posthumously published, was not known to any one but Hawthorne himself, until some time after his death, when the manuscript was found among his papers. The preparation and copying of his Note-Books for the press occupied the most of Mrs. Hawthorne's available time during the interval from 1864 to 1870; but in the latter year, having decided to publish the unfinished romance, she began the task of putting together its loose sheets and deciphering the handwriting, which, towards the close of Hawthorne's life, had grown somewhat obscure and uncertain. Her death occurred while she was thus engaged, and the transcription was completed by her daughters. The book was then issued simultaneously in America and England, in 1871.

Although "Septimius Felton" appeared so much later than "The Marble Faun," it was conceived and, in another form, begun before the Italian romance had presented itself to the author's mind. The legend of a bloody foot leaving its imprint where it passed, which figures so prominently in the following fiction, was brought to Hawthorne's notice on a visit to Smithell's Hall, Lancashire, England. [Footnote: See English Note-Books, April 7, and August 25, 1855.] Only five days after hearing of it, he made a note in his journal, referring to "my Romance," which had to do with a plot involving the affairs of a family established both in England and New England; and it seems likely that he had already begun to associate the bloody footstep with this project. What is extraordinary, and must be regarded as an unaccountable coincidence–one of the strange premonitions of genius–is that in 1850, before he had ever been to England and before he knew of the existence of Smithell's Hall, he had jotted down in his Note-Book, written in America, this suggestion: "The print in blood of a naked foot to be traced through the street of a town." The idea of treating in fiction the attempt to renew youth or to attain an earthly immortality had engaged his fancy quite early in his career, as we discover from "Doctor Heidegger's Experiment," in the "Twice-Told Tales." In 1840, also, we find in the journal: "If a man were sure of living forever, he would not care about his offspring." The "Mosses from an Old Manse" supply another link in this train of reflection; for "The Virtuoso's Collection" includes some of the elixir vitae "in an antique sepulchral urn." The narrator there represents himself as refusing to quaff it. "'No; I desire not an earthly immortality,' said I. 'Were man to live longer on earth, the spiritual would die out of him.... There is a celestial something within us that requires, after a certain time, the atmosphere of heaven to preserve it from ruin.'" On the other hand, just before hearing, for the first time, the legend of Smithell's Hall, he wrote in his English journal:–

"God himself cannot compensate us for being born for any period short of eternity. All the misery endured here constitutes a claim for another life, and still more all the happiness; because all true happiness involves something more than the earth owns, and needs something more than a mortal capacity for the enjoyment of it." It is sufficiently clear that he had meditated on the main theme of "Septimius Felton," at intervals, for many years....