Selections from the Writings of Lord Dunsay 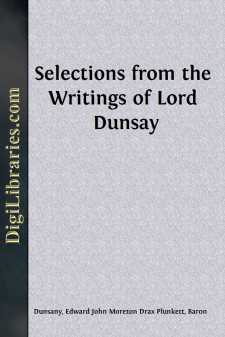 Lady Wilde once told me that when she was a young girl she was stopped in some Dublin street by a great crowd and turned into a shop to escape from it. She stayed there some time and the crowd still passed. She asked the shopman what it was, and he said, 'the funeral of Thomas Davis, a poet.' She had never heard of Davis; but because she thought a country that so honoured a poet must be worth something, she became interested in Ireland and was soon a famous patriotic poet herself, being, as she once said to me half in mockery, an eagle in her youth.

That age will be an age of romance for an hundred years to come. Its poetry slid into men's ears so smoothly that a man still living, though a very old man now, heard men singing at the railway stations he passed upon a journey into the country the verses he had published but that morning in a Dublin newspaper; and yet we should not regret too often that it has vanished, and left us poets even more unpopular than are our kind elsewhere in Europe; for now that we are unpopular we escape from crowds, from noises in the street, from voices that sing out of tune, from bad paper made one knows not from what refuse, from evil-smelling gum, from covers of emerald green, from that ideal of reliable, invariable men and women, which would forbid saint and connoisseur who always, the one in his simple, the other in his elaborate way, do what is unaccountable, and forbid life itself which, being, as the definition says, the only thing that moves itself, is always without precedent. When our age too has passed, when its moments also, that are so common and many, seem scarce and precious, students will perhaps open these books, printed by village girls at Dundrum, as curiously as at twenty years I opened the books of history and ballad verse of the old 'Library of Ireland.' They will notice that this new 'Library,' where I have gathered so much that seems to me representative or beautiful, unlike the old, is intended for few people, and written by men and women with that ideal condemned by 'Mary of the Nation', who wished, as she said, to make no elaborate beauty and to write nothing but what a peasant could understand. If they are philosophic or phantastic, it may even amuse them to find some analogy of the old with O'Connell's hearty eloquence, his winged dart shot always into the midst of the people, his mood of comedy; and of the new, with that lonely and haughty person below whose tragic shadow we of modern Ireland began to write.

The melancholy, the philosophic irony, the elaborate music of a play by John Synge, the simplicity, the sense of splendour of living in Lady Gregory's lamentation of Emer, Mr. James Stephens when he makes the sea waves 'Tramp with banners on the shore' are as much typical of our thoughts and day, as was 'She dwelt beside the Anner with mild eyes like the dawn,' or any stanza of the 'Pretty girl of Lough Dan,' or any novel of Charles Lever's of a time that sought to bring Irish men and women into one nation by means of simple patriotism and a genial taste for oratory and anecdotes....