Science in the Kitchen. 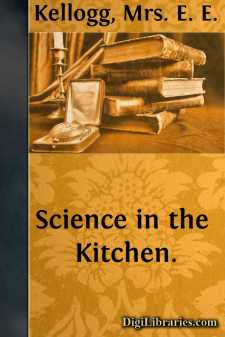 No one thing over which we have control exerts so marked an influence upon our physical prosperity as the food we eat; and it is no exaggeration to say that well-selected and scientifically prepared food renders the partaker whose digestion permits of its being well assimilated, superior to his fellow-mortals in those qualities which will enable him to cope most successfully with life's difficulties, and to fulfill the purpose of existence in the best and truest manner. The brain and other organs of the body are affected by the quality of the blood which nourishes them, and since the blood is made of the food eaten, it follows that the use of poor food will result in poor blood, poor muscles, poor brains, and poor bodies, incapable of first-class work in any capacity. Very few persons, however, ever stop to inquire what particular foods are best adapted to the manufacture of good blood and the maintenance of perfect health; but whatever gratifies the palate or is most conveniently obtained, is cooked and eaten without regard to its dietetic value. Far too many meals partake of the characteristics of the one described in the story told of a clergyman who, when requested to ask a blessing upon a dinner consisting of bread, hot and tinged with saleratus, meat fried to a crisp, potatoes swimming in grease, mince pie, preserves, and pickles, demurred on the ground that the dinner was "not worth a blessing." He might with equal propriety have added, "and not worth eating."

The subject of diet and its relation to human welfare, is one deserving of the most careful consideration. It should be studied as a science, to enable us to choose such materials as are best adapted to our needs under the varying circumstances of climate growth, occupation, and the numerous changing conditions of the human system; as an art, that we may become so skilled in the preparation of the articles selected as to make them both appetizing and healthful. It is an unfortunate fact that even among experienced housekeepers the scientific principles which govern the proper preparation of food, are but little understood, and much unwholesome cookery is the result. The mechanical mixing of ingredients is not sufficient to secure good results; and many of the failures attributed to "poor material," "bad luck," and various other subterfuges to which cooks ignorance of scientific principles. The common method of blindly following recipes, with no knowledge of "the reason why," can hardly fail to be often productive of unsatisfactory results, which to the uninformed seem quite inexplicable.

Cookery, when based upon scientific principles, ceases to be the difficult problem it so often appears. Cause and effect follow each other as certainly in the preparation of food as in other things; and with a knowledge of the underlying principles, and faithfulness in carrying out the necessary details, failure becomes almost an impossibility. There is no department of human activity where applied science offers greater advantages than in that of cookery, and in our presentation of the subjects treated in the following pages, we have endeavored, so far as consistent with the scope of this work, to give special prominence to the scientific principles involved in the successful production of wholesome articles of food. We trust our readers will find these principles so plainly elucidated and the subject so interesting, that they will be stimulated to undertake for themselves further study and research in this most important branch of household science. We have aimed also to give special precedence of space to those most important foods, the legumes, and grains and their products, which in the majority of cook books are given but little consideration or are even left out altogether, believing that our readers will be more interested in learning the many palatable ways in which these especially nutritious and inexpensive foods may be prepared, than in a reiteration of such dishes as usually make up the bulk of the average cook book.

For reasons stated elsewhere (in the chapter on Milk, Cream, and Butter), we have in the preparation of all recipes made use of cream in place of other fats; but lest there be some who may suppose because cream occupies so frequent a place in the recipes, and because of their inability to obtain that article, the recipes are therefore not adapted to their use, we wish to state that a large proportion of the recipes in which it is mentioned as seasoning, or for dressing, will be found to be very palatable with the cream omitted, or by the use of its place of some one of the many substitutes recommended....