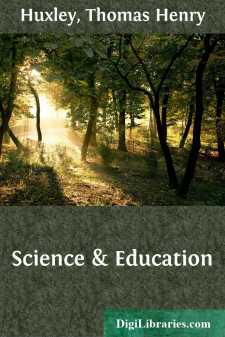 Almost all the processes employed in the arts and manufactures fall within the range either of physics or of chemistry. In order to improve them, one must thoroughly understand them; and no one has a chance of really understanding them, unless he has obtained that mastery of principles and that habit of dealing with facts, which is given by long-continued and well-directed purely scientific training in the physical and the chemical laboratory. So that there really is no question as to the necessity of purely scientific discipline, even if the work of the College were limited by the narrowest interpretation of its stated aims.

And, as to the desirableness of a wider culture than that yielded by science alone, it is to be recollected that the improvement of manufacturing processes is only one of the conditions which contribute to the prosperity of industry. Industry is a means and not an end; and mankind work only to get something which they want. What that something is depends partly on their innate, and partly on their acquired, desires.

If the wealth resulting from prosperous industry is to be spent upon the gratification of unworthy desires, if the increasing perfection of manufacturing processes is to be accompanied by an increasing debasement of those who carry them on, I do not see the good of industry and prosperity.

Now it is perfectly true that men's views of what is desirable depend upon their characters; and that the innate proclivities to which we give that name are not touched by any amount of instruction. But it does not follow that even mere intellectual education may not, to an indefinite extent, modify the practical manifestation of the characters of men in their actions, by supplying them with motives unknown to the ignorant. A pleasure-loving character will have pleasure of some sort; but, if you give him the choice, he may prefer pleasures which do not degrade him to those which do. And this choice is offered to every man, who possesses in literary or artistic culture a never-failing source of pleasures, which are neither withered by age, nor staled by custom, nor embittered in the recollection by the pangs of self-reproach.

If the Institution opened to-day fulfils the intention of its founder, the picked intelligences among all classes of the population of this district will pass through it. No child born in Birmingham, henceforward, if he have the capacity to profit by the opportunities offered to him, first in the primary and other schools, and afterwards in the Scientific College, need fail to obtain, not merely the instruction, but the culture most appropriate to the conditions of his life.

Within these walls, the future employer and the future artisan may sojourn together for a while, and carry, through all their lives, the stamp of the influences then brought to bear upon them. Hence, it is not beside the mark to remind you, that the prosperity of industry depends not merely upon the improvement of manufacturing processes, not merely upon the ennobling of the individual character, but upon a third condition, namely, a clear understanding of the conditions of social life, on the part of both the capitalist and the operative, and their agreement upon common principles of social action. They must learn that social phaenomena are as much the expression of natural laws as any others; that no social arrangements can be permanent unless they harmonise with the requirements of social statics and dynamics; and that, in the nature of things, there is an arbiter whose decisions execute themselves.