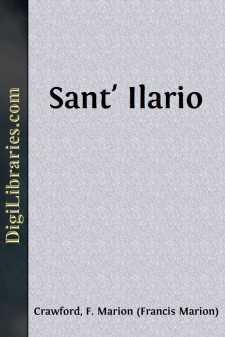 Two years of service in the Zouaves had wrought a change in Anastase Gouache, the painter. He was still a light man, nervously built, with small hands and feet, and a delicate face; but constant exposure to the weather had browned his skin, and a life of unceasing activity had strengthened his sinews and hardened his compact frame. The clustering black curls were closely cropped, too, while the delicate dark moustache had slightly thickened. He had grown to be a very soldierly young fellow, straight and alert, quick of hand and eye, inured to that perpetual readiness which is the first characteristic of the good soldier, whether in peace or war. The dreamy look that was so often in his face in the days when he sat upon a high stool painting the portrait of Donna Tullia Mayer, had given place to an expression of wide-awake curiosity in the world's doings.

Anastase was an artist by nature and no amount of military service could crush the chief aspirations of his intelligence. He had not abandoned work since he had joined the Zouaves, for his hours of leisure from duty were passed in his studio. But the change in his outward appearance was connected with a similar development in his character. He himself sometimes wondered how he could have ever taken any interest in the half-hearted political fumbling which Donna Tullia, Ugo Del Ferice, and others of their set used to dignify by the name of conspiracy. It seemed to him that his ideas must at that time have been deplorably confused and lamentably unsettled. He sometimes took out the old sketch of Madame Mayer's portrait, and setting it upon his easel, tried to realise and bring back those times when she had sat for him. He could recall Del Ferice's mock heroics, Donna Tullia's ill-expressed invectives, and his own half-sarcastic sympathy in the liberal movement; but the young fellow in an old velveteen jacket who used to talk glibly about the guillotine, about stringing-up the clericals to street-lamps and turning the churches into popular theatres, was surely not the energetic, sunburnt Zouave who had been hunting down brigands in the Samnite hills last summer, who spent three-fourths of his time among soldiers like himself, and who had pledged his honour to follow the gallant Charette and defend the Pope as long as he could carry a musket.

There is a sharp dividing line between youth and manhood. Sometimes we cross it early, and sometimes late, but we do not know that we are passing from one life to another as we step across the boundary. The world seems to us the same for a while, as we knew it yesterday and shall know it to-morrow. Suddenly, we look back and start with astonishment when we see the past, which we thought so near, already vanishing in the distance, shapeless, confused, and estranged from our present selves. Then, we know that we are men, and acknowledge, with something like a sigh, that we have put away childish things.

When Gouache put on the gray jacket, the red sash and the yellow gaiters, he became a man and speedily forgot Donna Tullia and her errors, and for some time afterwards he did not care to recall them....