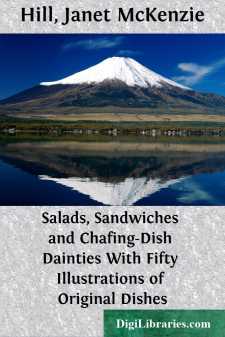 There is positive need of more widespread knowledge of the principles of cookery. Few women know how to cook an egg or boil a potato properly, and the making of the perfect loaf of bread has long been assigned a place among the "lost arts."

By many women cooking is considered, at best, a homely art,—a necessary kind of drudgery; and the composition, if not the consumption, of salads and chafing-dish productions has been restricted, hitherto, chiefly to that half of the race "who cook to please themselves." But, since women have become anxious to compete with men in any and every walk of life, they, too, are desirous of becoming adepts in tossing up an appetizing salad or in stirring a creamy rarebit. And yet neither a pleasing salad, especially if it is to be composed of cooked materials, nor a tempting rarebit can be evolved, save by happy accident, without an accurate knowledge of the fundamental principles that underlie all cookery.

In a book of this nature and scope, the philosophy of heat at different temperatures, as it is applied in cooking, and the more scientific aspects of culinary processes, could not be dwelt upon; but, while we have not overlooked the ABC of the art, our special aim has been to present our topics in such a simple and pleasing form that she who attempts the composition of the dishes described herein will not be satisfied until she has gained a deeper insight into the conditions necessary for success in the pursuit of these as well as other fascinating branches of the culinary art.

Care has been exercised to meet the actual needs of those who wish to cultivate a taste for light, wholesome dishes, or to cater to the vagaries of the most capricious appetites.

There is nothing new under the sun, so no claim is made to absolute originality in contents. In this and all similar works, the matter of necessity must consist, in the main, of old material in a new dress.

Though the introduction to Part III. was originally written for this book, the substance of it was published in the December-January (1898-99) issue of the Boston Cooking-School Magazine. From time to time, also, a few of the recipes, with minor changes, have appeared in that journal.

Illustrations by means of half-tones produced from photographs of actual dishes were first brought out, we think, by The Century Company; in this line, however, both in the number and in the variety of the dishes prepared, the author may justly claim to have done more than any other has yet essayed. The illustrations on these pages were prepared expressly for this work, and the dishes and the photographs of the same were executed under our own hand and eye. That results pleasing to the eye and acceptable to the taste await those who try the confections described in this book is the sincere wish of the author.

JANET M. HILL Contents Part I. SALADS page Introduction The Dressing Use of Dressings Arrangement of Salads Composition of Mayonnaise Value of Oil Boiled and Cream Dressings Important Points in Salad-Making When to serve Salads with French or Mayonnaise Dressing When to serve a Fruit Salad Salads with Cheese How to make Aromatic Vinegars, keep Vegetables, and prepare Garnishes How to boil Eggs hard for Garnishing To poach Whites of Eggs Royal Custard for Moulds of Aspic How to use Garlic or Onion in Salads How to shell and blanch Chestnuts and other Nuts How to chop Fresh Herbs How to cut Radishes for a Garnish How to clean Lettuce, Endive, etc....
Show more
Show less