Rural Architecture Being a Complete Description of Farm Houses, Cottages, and Out Buildings 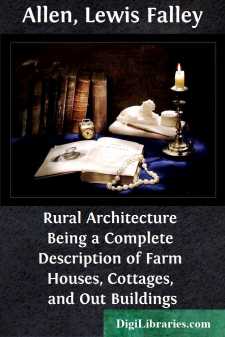 The lover of country life who looks upon rural objects in the true spirit, and, for the first time surveys the cultivated portions of the United States, will be struck with the incongruous appearance and style of our farm houses and their contiguous buildings; and, although, on examination, he will find many, that in their interior accommodation, and perhaps relative arrangement to each other, are tolerably suited to the business and convenience of the husbandman, still, the feeling will prevail that there is an absence of method, congruity, and correct taste in the architectural structure of his buildings generally, by the American farmer.

We may, in truth, be said to have no architecture at all, as exhibited in our agricultural districts, so far as any correct system, or plan is concerned, as the better taste in building, which a few years past has introduced among us, has been chiefly confined to our cities and towns of rapid growth. Even in the comparatively few buildings in the modern style to be seen in our farming districts, from the various requirements of those buildings being partially unknown to the architect and builder, who had their planning—and upon whom, owing to their own inexperience in such matters, their employers have relied—a majority of such dwellings have turned out, if not absolute failures, certainly not what the necessities of the farmer has demanded. Consequently, save in the mere item of outward appearance—and that, not always—the farmer and cottager have gained nothing, owing to the absurdity in style or arrangement, and want of fitness to circumstances adopted for the occasion.

We have stated that our prevailing rural architecture is discordant in appearance; it may be added, that it is also uncouth, out of keeping with correct rules, and, ofttimes offensive to the eye of any lover of rural harmony. Why it is so, no matter, beyond the apology already given—that of an absence of cultivation, and thought upon the subject. It may be asked, of what consequence is it that the farmer or small property-holder should conform to given rules, or mode, in the style and arrangement of his dwelling, or out-buildings, so that they be reasonably convenient, and answer his purposes? For the same reason that he requires symmetry, excellence of form or style, in his horses, his cattle, or other farm stock, household furniture, or personal dress. It is an arrangement of artificial objects, in harmony with natural objects; a cultivation of the sympathies which every rational being should have, more or less, with true taste; that costs little or nothing in the attainment, and, when attained, is a source of gratification through life. Every human being is bound, under ordinary circumstances, to leave the world somewhat better, so far as his own acts or exertions are concerned, than he found it, in the exercise of such faculties as have been given him. Such duty, among thinking men, is conceded, so far as the moral world is concerned; and why not in the artificial?...