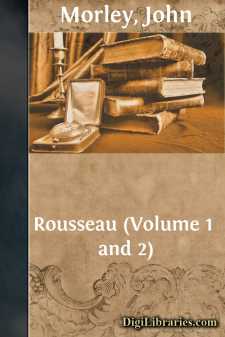 Christianity is the name for a great variety of changes which took place during the first centuries of our era, in men's ways of thinking and feeling about their spiritual relations to unseen powers, about their moral relations to one another, about the basis and type of social union. So the Revolution is now the accepted name for a set of changes which began faintly to take a definite practical shape first in America, and then in France, towards the end of the eighteenth century; they had been directly prepared by a small number of energetic thinkers, whose speculations represented, as always, the prolongation of some old lines of thought in obedience to the impulse of new social and intellectual conditions. While one movement supplied the energy and the principles which extricated civilisation from the ruins of the Roman empire, the other supplies the energy and the principles which already once, between the Seven Years' War and the assembly of the States General, saved human progress in face of the political fatuity of England and the political nullity of France; and they are now, amid the distraction of the various representatives of an obsolete ordering, the only forces to be trusted at once for multiplying the achievements of human intelligence stimulated by human sympathy, and for diffusing their beneficent results with an ampler hand and more far-scattering arm. Faith in a divine power, devout obedience to its supposed will, hope of ecstatic, unspeakable reward, these were the springs of the old movement. Undivided love of our fellows, steadfast faith in human nature, steadfast search after justice, firm aspiration towards improvement, and generous contentment in the hope that others may reap whatever reward may be, these are the springs of the new.

There is no given set of practical maxims agreed to by all members of the revolutionary schools for achieving the work of release from the pressure of an antiquated social condition, any more than there is one set of doctrines and one kind of discipline accepted by all Protestants. Voltaire was a revolutionist in one sense, Diderot in another, and Rousseau in a third, just as in the practical order, Lafayette, Danton, Robespierre, represented three different aspirations and as many methods. Rousseau was the most directly revolutionary of all the speculative precursors, and he was the first to apply his mind boldly to those of the social conditions which the revolution is concerned by one solution or another to modify. How far his direct influence was disastrous in consequence of a mischievous method, we shall have to examine. It was so various that no single answer can comprehend an exhaustive judgment. His writings produced that glow of enthusiastic feeling in France, which led to the all-important assistance rendered by that country to the American colonists in a struggle so momentous for mankind. It was from his writings that the Americans took the ideas and the phrases of their great charter, thus uniting the native principles of their own direct Protestantism with principles that were strictly derivative from the Protestantism of Geneva. Again, it was his work more than that of any other one man, that France arose from the deadly decay which had laid hold of her whole social and political system, and found that irresistible energy which warded off dissolution within and partition from without. We shall see, further, that besides being the first immediately revolutionary thinker in politics, he was the most stirring of reactionists in religion. His influence formed not only Robespierre and Paine, but Chateaubriand, not only Jacobinism, but the Catholicism of the Restoration. Thus he did more than any one else at once to give direction to the first episodes of revolution, and force to the first episode of reaction.

There are some teachers whose distinction is neither correct thought, nor an eye for the exigencies of practical organisation, but simply depth and fervour of the moral sentiment, bringing with it the indefinable gift of touching many hearts with love of virtue and the things of the spirit....