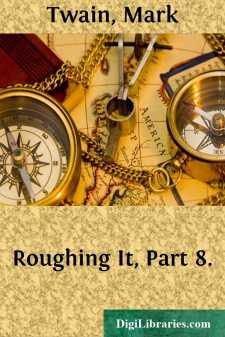 At four o'clock in the afternoon we were winding down a mountain of dreary and desolate lava to the sea, and closing our pleasant land journey. This lava is the accumulation of ages; one torrent of fire after another has rolled down here in old times, and built up the island structure higher and higher. Underneath, it is honey-combed with caves; it would be of no use to dig wells in such a place; they would not hold water—you would not find any for them to hold, for that matter. Consequently, the planters depend upon cisterns.

The last lava flow occurred here so long ago that there are none now living who witnessed it. In one place it enclosed and burned down a grove of cocoa-nut trees, and the holes in the lava where the trunks stood are still visible; their sides retain the impression of the bark; the trees fell upon the burning river, and becoming partly submerged, left in it the perfect counterpart of every knot and branch and leaf, and even nut, for curiosity seekers of a long distant day to gaze upon and wonder at.

There were doubtless plenty of Kanaka sentinels on guard hereabouts at that time, but they did not leave casts of their figures in the lava as the Roman sentinels at Herculaneum and Pompeii did. It is a pity it is so, because such things are so interesting; but so it is. They probably went away. They went away early, perhaps. However, they had their merits; the Romans exhibited the higher pluck, but the Kanakas showed the sounder judgment.

Shortly we came in sight of that spot whose history is so familiar to every school-boy in the wide world—Kealakekua Bay—the place where Captain Cook, the great circumnavigator, was killed by the natives, nearly a hundred years ago. The setting sun was flaming upon it, a Summer shower was falling, and it was spanned by two magnificent rainbows. Two men who were in advance of us rode through one of these and for a moment their garments shone with a more than regal splendor. Why did not Captain Cook have taste enough to call his great discovery the Rainbow Islands? These charming spectacles are present to you at every turn; they are common in all the islands; they are visible every day, and frequently at night also—not the silvery bow we see once in an age in the States, by moonlight, but barred with all bright and beautiful colors, like the children of the sun and rain. I saw one of them a few nights ago. What the sailors call "raindogs"—little patches of rainbow—are often seen drifting about the heavens in these latitudes, like stained cathedral windows.

Kealakekua Bay is a little curve like the last kink of a snail-shell, winding deep into the land, seemingly not more than a mile wide from shore to shore. It is bounded on one side—where the murder was done—by a little flat plain, on which stands a cocoanut grove and some ruined houses; a steep wall of lava, a thousand feet high at the upper end and three or four hundred at the lower, comes down from the mountain and bounds the inner extremity of it....