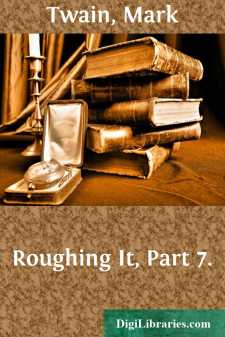 One of my comrades there—another of those victims of eighteen years of unrequited toil and blighted hopes—was one of the gentlest spirits that ever bore its patient cross in a weary exile: grave and simple Dick Baker, pocket-miner of Dead-House Gulch.—He was forty-six, gray as a rat, earnest, thoughtful, slenderly educated, slouchily dressed and clay- soiled, but his heart was finer metal than any gold his shovel ever brought to light—than any, indeed, that ever was mined or minted.

Whenever he was out of luck and a little down-hearted, he would fall to mourning over the loss of a wonderful cat he used to own (for where women and children are not, men of kindly impulses take up with pets, for they must love something). And he always spoke of the strange sagacity of that cat with the air of a man who believed in his secret heart that there was something human about it—may be even supernatural.

I heard him talking about this animal once. He said:

"Gentlemen, I used to have a cat here, by the name of Tom Quartz, which you'd a took an interest in I reckon—most any body would. I had him here eight year—and he was the remarkablest cat I ever see. He was a large gray one of the Tom specie, an' he had more hard, natchral sense than any man in this camp—'n' a power of dignity—he wouldn't let the Gov'ner of Californy be familiar with him. He never ketched a rat in his life—'peared to be above it. He never cared for nothing but mining. He knowed more about mining, that cat did, than any man I ever, ever see. You couldn't tell him noth'n 'bout placer diggin's—'n' as for pocket mining, why he was just born for it.

"He would dig out after me an' Jim when we went over the hills prospect'n', and he would trot along behind us for as much as five mile, if we went so fur. An' he had the best judgment about mining ground—why you never see anything like it. When we went to work, he'd scatter a glance around, 'n' if he didn't think much of the indications, he would give a look as much as to say, 'Well, I'll have to get you to excuse me,' 'n' without another word he'd hyste his nose into the air 'n' shove for home. But if the ground suited him, he would lay low 'n' keep dark till the first pan was washed, 'n' then he would sidle up 'n' take a look, an' if there was about six or seven grains of gold he was satisfied—he didn't want no better prospect 'n' that—'n' then he would lay down on our coats and snore like a steamboat till we'd struck the pocket, an' then get up 'n' superintend. He was nearly lightnin' on superintending.

"Well, bye an' bye, up comes this yer quartz excitement. Every body was into it—every body was pick'n' 'n' blast'n' instead of shovelin' dirt on the hill side—every body was put'n' down a shaft instead of scrapin' the surface. Noth'n' would do Jim, but we must tackle the ledges, too, 'n' so we did. We commenced put'n' down a shaft, 'n' Tom Quartz he begin to wonder what in the Dickens it was all about. He hadn't ever seen any mining like that before, 'n' he was all upset, as you may say—he couldn't come to a right understanding of it no way—it was too many for him....