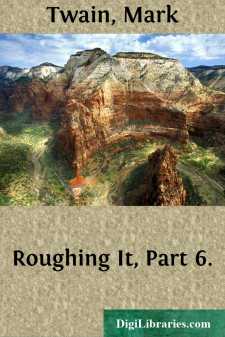 Vice flourished luxuriantly during the hey-day of our "flush times." The saloons were overburdened with custom; so were the police courts, the gambling dens, the brothels and the jails—unfailing signs of high prosperity in a mining region—in any region for that matter. Is it not so? A crowded police court docket is the surest of all signs that trade is brisk and money plenty. Still, there is one other sign; it comes last, but when it does come it establishes beyond cavil that the "flush times" are at the flood. This is the birth of the "literary" paper. The Weekly Occidental, "devoted to literature," made its appearance in Virginia. All the literary people were engaged to write for it. Mr. F. was to edit it. He was a felicitous skirmisher with a pen, and a man who could say happy things in a crisp, neat way. Once, while editor of the Union, he had disposed of a labored, incoherent, two-column attack made upon him by a contemporary, with a single line, which, at first glance, seemed to contain a solemn and tremendous compliment—viz.: "THE LOGIC OF OUR ADVERSARY RESEMBLES THE PEACE OF GOD,"—and left it to the reader's memory and after-thought to invest the remark with another and "more different" meaning by supplying for himself and at his own leisure the rest of the Scripture—"in that it passeth understanding." He once said of a little, half-starved, wayside community that had no subsistence except what they could get by preying upon chance passengers who stopped over with them a day when traveling by the overland stage, that in their Church service they had altered the Lord's Prayer to read: "Give us this day our daily stranger!"

We expected great things of the Occidental. Of course it could not get along without an original novel, and so we made arrangements to hurl into the work the full strength of the company. Mrs. F. was an able romancist of the ineffable school—I know no other name to apply to a school whose heroes are all dainty and all perfect. She wrote the opening chapter, and introduced a lovely blonde simpleton who talked nothing but pearls and poetry and who was virtuous to the verge of eccentricity. She also introduced a young French Duke of aggravated refinement, in love with the blonde. Mr. F. followed next week, with a brilliant lawyer who set about getting the Duke's estates into trouble, and a sparkling young lady of high society who fell to fascinating the Duke and impairing the appetite of the blonde. Mr. D., a dark and bloody editor of one of the dailies, followed Mr. F., the third week, introducing a mysterious Roscicrucian who transmuted metals, held consultations with the devil in a cave at dead of night, and cast the horoscope of the several heroes and heroines in such a way as to provide plenty of trouble for their future careers and breed a solemn and awful public interest in the novel. He also introduced a cloaked and masked melodramatic miscreant, put him on a salary and set him on the midnight track of the Duke with a poisoned dagger....