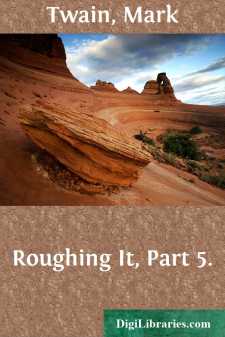 Captain Nye was very ill indeed, with spasmodic rheumatism. But the old gentleman was himself—which is to say, he was kind-hearted and agreeable when comfortable, but a singularly violent wild-cat when things did not go well. He would be smiling along pleasantly enough, when a sudden spasm of his disease would take him and he would go out of his smile into a perfect fury. He would groan and wail and howl with the anguish, and fill up the odd chinks with the most elaborate profanity that strong convictions and a fine fancy could contrive. With fair opportunity he could swear very well and handle his adjectives with considerable judgment; but when the spasm was on him it was painful to listen to him, he was so awkward. However, I had seen him nurse a sick man himself and put up patiently with the inconveniences of the situation, and consequently I was willing that he should have full license now that his own turn had come. He could not disturb me, with all his raving and ranting, for my mind had work on hand, and it labored on diligently, night and day, whether my hands were idle or employed. I was altering and amending the plans for my house, and thinking over the propriety of having the billard-room in the attic, instead of on the same floor with the dining-room; also, I was trying to decide between green and blue for the upholstery of the drawing-room, for, although my preference was blue I feared it was a color that would be too easily damaged by dust and sunlight; likewise while I was content to put the coachman in a modest livery, I was uncertain about a footman—I needed one, and was even resolved to have one, but wished he could properly appear and perform his functions out of livery, for I somewhat dreaded so much show; and yet, inasmuch as my late grandfather had had a coachman and such things, but no liveries, I felt rather drawn to beat him;—or beat his ghost, at any rate; I was also systematizing the European trip, and managed to get it all laid out, as to route and length of time to be devoted to it—everything, with one exception—namely, whether to cross the desert from Cairo to Jerusalem per camel, or go by sea to Beirut, and thence down through the country per caravan. Meantime I was writing to the friends at home every day, instructing them concerning all my plans and intentions, and directing them to look up a handsome homestead for my mother and agree upon a price for it against my coming, and also directing them to sell my share of the Tennessee land and tender the proceeds to the widows' and orphans' fund of the typographical union of which I had long been a member in good standing. [This Tennessee land had been in the possession of the family many years, and promised to confer high fortune upon us some day; it still promises it, but in a less violent way.]

When I had been nursing the Captain nine days he was somewhat better, but very feeble. During the afternoon we lifted him into a chair and gave him an alcoholic vapor bath, and then set about putting him on the bed again....