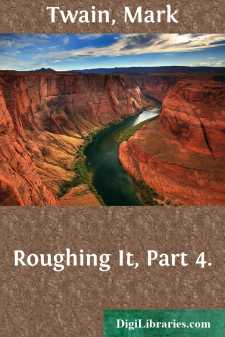 There were two men in the company who caused me particular discomfort. One was a little Swede, about twenty-five years old, who knew only one song, and he was forever singing it. By day we were all crowded into one small, stifling bar-room, and so there was no escaping this person's music. Through all the profanity, whisky-guzzling, "old sledge" and quarreling, his monotonous song meandered with never a variation in its tiresome sameness, and it seemed to me, at last, that I would be content to die, in order to be rid of the torture. The other man was a stalwart ruffian called "Arkansas," who carried two revolvers in his belt and a bowie knife projecting from his boot, and who was always drunk and always suffering for a fight. But he was so feared, that nobody would accommodate him. He would try all manner of little wary ruses to entrap somebody into an offensive remark, and his face would light up now and then when he fancied he was fairly on the scent of a fight, but invariably his victim would elude his toils and then he would show a disappointment that was almost pathetic. The landlord, Johnson, was a meek, well-meaning fellow, and Arkansas fastened on him early, as a promising subject, and gave him no rest day or night, for awhile. On the fourth morning, Arkansas got drunk and sat himself down to wait for an opportunity. Presently Johnson came in, just comfortably sociable with whisky, and said:

"I reckon the Pennsylvania 'lection—"

Arkansas raised his finger impressively and Johnson stopped. Arkansas rose unsteadily and confronted him. Said he:

"Why, I never said nothing, Mr. Arkansas. You don't give a man no chance. I was only goin' to say that Pennsylvania was goin' to have an election next week—that was all—that was everything I was goin' to say—I wish I may never stir if it wasn't."

"Well then why d'n't you say it? What did you come swellin' around that way for, and tryin' to raise trouble?"

"Why I didn't come swellin' around, Mr. Arkansas—I just—"

"Oh, please, Mr. Arkansas, I never meant such a thing as that, I wish I may die if I did. All the boys will tell you that I've always spoke well of you, and respected you more'n any man in the house....