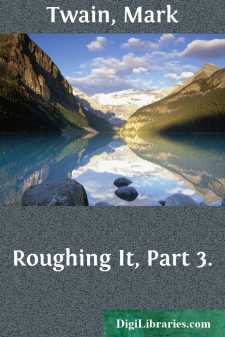 We were approaching the end of our long journey. It was the morning of the twentieth day. At noon we would reach Carson City, the capital of Nevada Territory. We were not glad, but sorry. It had been a fine pleasure trip; we had fed fat on wonders every day; we were now well accustomed to stage life, and very fond of it; so the idea of coming to a stand-still and settling down to a humdrum existence in a village was not agreeable, but on the contrary depressing.

Visibly our new home was a desert, walled in by barren, snow-clad mountains. There was not a tree in sight. There was no vegetation but the endless sage-brush and greasewood. All nature was gray with it. We were plowing through great deeps of powdery alkali dust that rose in thick clouds and floated across the plain like smoke from a burning house.

We were coated with it like millers; so were the coach, the mules, the mail-bags, the driver—we and the sage-brush and the other scenery were all one monotonous color. Long trains of freight wagons in the distance envelope in ascending masses of dust suggested pictures of prairies on fire. These teams and their masters were the only life we saw. Otherwise we moved in the midst of solitude, silence and desolation. Every twenty steps we passed the skeleton of some dead beast of burthen, with its dust-coated skin stretched tightly over its empty ribs. Frequently a solemn raven sat upon the skull or the hips and contemplated the passing coach with meditative serenity.

By and by Carson City was pointed out to us. It nestled in the edge of a great plain and was a sufficient number of miles away to look like an assemblage of mere white spots in the shadow of a grim range of mountains overlooking it, whose summits seemed lifted clear out of companionship and consciousness of earthly things.

We arrived, disembarked, and the stage went on. It was a "wooden" town; its population two thousand souls. The main street consisted of four or five blocks of little white frame stores which were too high to sit down on, but not too high for various other purposes; in fact, hardly high enough. They were packed close together, side by side, as if room were scarce in that mighty plain.

The sidewalk was of boards that were more or less loose and inclined to rattle when walked upon. In the middle of the town, opposite the stores, was the "plaza" which is native to all towns beyond the Rocky Mountains—a large, unfenced, level vacancy, with a liberty pole in it, and very useful as a place for public auctions, horse trades, and mass meetings, and likewise for teamsters to camp in. Two other sides of the plaza were faced by stores, offices and stables.

The rest of Carson City was pretty scattering.

We were introduced to several citizens, at the stage-office and on the way up to the Governor's from the hotel—among others, to a Mr. Harris, who was on horseback; he began to say something, but interrupted himself with the remark:

"I'll have to get you to excuse me a minute; yonder is the witness that swore I helped to rob the California coach—a piece of impertinent intermeddling, sir, for I am not even acquainted with the man."