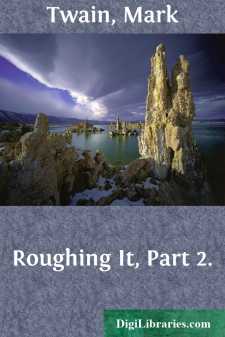 And sure enough, two or three years afterward, we did hear him again. News came to the Pacific coast that the Vigilance Committee in Montana (whither Slade had removed from Rocky Ridge) had hanged him. I find an account of the affair in the thrilling little book I quoted a paragraph from in the last chapter—"The Vigilantes of Montana; being a Reliable Account of the Capture, Trial and Execution of Henry Plummer's Notorious Road Agent Band: By Prof. Thos. J. Dimsdale, Virginia City, M.T." Mr. Dimsdale's chapter is well worth reading, as a specimen of how the people of the frontier deal with criminals when the courts of law prove inefficient. Mr. Dimsdale makes two remarks about Slade, both of which are accurately descriptive, and one of which is exceedingly picturesque: "Those who saw him in his natural state only, would pronounce him to be a kind husband, a most hospitable host and a courteous gentleman; on the contrary, those who met him when maddened with liquor and surrounded by a gang of armed roughs, would pronounce him a fiend incarnate." And this: "From Fort Kearney, west, he was feared a great deal more than the almighty." For compactness, simplicity and vigor of expression, I will "back" that sentence against anything in literature. Mr. Dimsdale's narrative is as follows. In all places where italics occur, they are mine:

After the execution of the five men on the 14th of January, the Vigilantes considered that their work was nearly ended. They had freed the country of highwaymen and murderers to a great extent, and they determined that in the absence of the regular civil authority they would establish a People's Court where all offenders should be tried by judge and jury. This was the nearest approach to social order that the circumstances permitted, and, though strict legal authority was wanting, yet the people were firmly determined to maintain its efficiency, and to enforce its decrees. It may here be mentioned that the overt act which was the last round on the fatal ladder leading to the scaffold on which Slade perished, was the tearing in pieces and stamping upon a writ of this court, followed by his arrest of the Judge Alex. Davis, by authority of a presented Derringer, and with his own hands.

J. A. Slade was himself, we have been informed, a Vigilante; he openly boasted of it, and said he knew all that they knew. He was never accused, or even suspected, of either murder or robbery, committed in this Territory (the latter crime was never laid to his charge, in any place); but that he had killed several men in other localities was notorious, and his bad reputation in this respect was a most powerful argument in determining his fate, when he was finally arrested for the offence above mentioned. On returning from Milk River he became more and more addicted to drinking, until at last it was a common feat for him and his friends to "take the town." He and a couple of his dependents might often be seen on one horse, galloping through the streets, shouting and yelling, firing revolvers, etc....