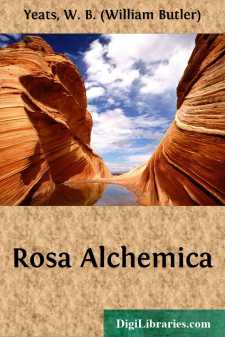 It is now more than ten years since I met, for the last time, Michael Robartes, and for the first time and the last time his friends and fellow students; and witnessed his and their tragic end, and endured those strange experiences, which have changed me so that my writings have grown less popular and less intelligible, and driven me almost to the verge of taking the habit of St. Dominic. I had just published Rosa Alchemica, a little work on the Alchemists, somewhat in the manner of Sir Thomas Browne, and had received many letters from believers in the arcane sciences, upbraiding what they called my timidity, for they could not believe so evident sympathy but the sympathy of the artist, which is half pity, for everything which has moved men's hearts in any age. I had discovered, early in my researches, that their doctrine was no merely chemical phantasy, but a philosophy they applied to the world, to the elements and to man himself; and that they sought to fashion gold out of common metals merely as part of an universal transmutation of all things into some divine and imperishable substance; and this enabled me to make my little book a fanciful reverie over the transmutation of life into art, and a cry of measureless desire for a world made wholly of essences.

I was sitting dreaming of what I had written, in my house in one of the old parts of Dublin; a house my ancestors had made almost famous through their part in the politics of the city and their friendships with the famous men of their generations; and was feeling an unwonted happiness at having at last accomplished a long-cherished design, and made my rooms an expression of this favourite doctrine. The portraits, of more historical than artistic interest, had gone; and tapestry, full of the blue and bronze of peacocks, fell over the doors, and shut out all history and activity untouched with beauty and peace; and now when I looked at my Crevelli and pondered on the rose in the hand of the Virgin, wherein the form was so delicate and precise that it seemed more like a thought than a flower, or at the grey dawn and rapturous faces of my Francesca, I knew all a Christian's ecstasy without his slavery to rule and custom; when I pondered over the antique bronze gods and goddesses, which I had mortgaged my house to buy, I had all a pagan's delight in various beauty and without his terror at sleepless destiny and his labour with many sacrifices; and I had only to go to my bookshelf, where every book was bound in leather, stamped with intricate ornament, and of a carefully chosen colour: Shakespeare in the orange of the glory of the world, Dante in the dull red of his anger, Milton in the blue grey of his formal calm; and I could experience what I would of human passions without their bitterness and without satiety. I had gathered about me all gods because I believed in none, and experienced every pleasure because I gave myself to none, but held myself apart, individual, indissoluble, a mirror of polished steel: I looked in the triumph of this imagination at the birds of Hera, glowing in the firelight as though they were wrought of jewels; and to my mind, for which symbolism was a necessity, they seemed the doorkeepers of my world, shutting out all that was not of as affluent a beauty as their own; and for a moment I thought as I had thought in so many other moments, that it was possible to rob life of every bitterness except the bitterness of death; and then a thought which had followed this thought, time after time, filled me with a passionate sorrow....