Robin Tremayne A Story of the Marian Persecution 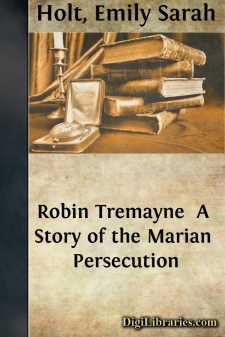 More than three hundred years have rolled away since the events narrated in the following pages stirred the souls of men; since John Bradford sat down to his “merry supper with the Lord;” since Lawrence Saunders slept peacefully at the stake, lifted over the dark river in the arms of God; since Ridley and Latimer, on that autumn morning at Oxford, lighted that candle in England which they trusted by God’s grace should never be put out.

And how stands it with England now? For forty-three years, like a bird fascinated by the serpent, she has been creeping gradually closer to the outstretched arms of the great enchantress. Is she blind and deaf? Has she utterly forgotten all her history, all the traditions of her greatness? It is not quite too late to halt in her path of destruction; but how soon may it become so? How soon may the dying scream of the bird be hushed in the jaws of the serpent?

The candle which was lighted on that autumn morning is burning dim. It burns dimmer every year, as England yields more and more to Rome. And every living soul of us all is responsible to God for the preservation of its blessed light. O sons and daughters of England, shall it be put out?

Chapter One. The Folding of the Lamb.

“And then she fell asleep; but God    Knew that His Heaven was better far,    Where little children angels are;And so, for paths she should have trodThrough thorns and flowers, gave her this sod.“He gave her rest for troublousness,    And a calm sleep for fitful dreams    Of what is, and of more that seemsFor tossings upon earth and seasGave her to see Him where He is.”W.M. Rossetti.

“Arbel, look forth and see if thy father and Robin be at hand. I fear the pie shall be overbaken.”

The speaker was a woman of about forty years of age, of that quiet and placid demeanour which indicates that great provocation would be needed to evoke any disturbance of temper. Gathering up the garment on which she was at work, Arbel (Note 1) crossed the long, low room to a wide casement, on the outer mullions of which sundry leafless boughs were tapping as if to ask shelter from the cold; and after standing there for two or three minutes, announced that the missing members of the family were approaching.

“And a third party withal,” added she; “that seemeth me, so far as I may hence discern, to be Doctor Thorpe.”

“He is very welcome, an’ it be he,” returned her mother, still calmly spinning. “I trust to ask his counsel touching Robin.”

Figuratively speaking, for more than a century was yet to elapse ere George Fox founded the Society of Friends, it might be said that Custance (Note 2) Tremayne was born a Quakeress. It had hitherto proved impossible, through all the annals of the family experience, to offend or anger her. She was an affectionate wife and mother, but nothing roused in her any outward exhibition of anxiety or annoyance. The tenor of her way was very even indeed....