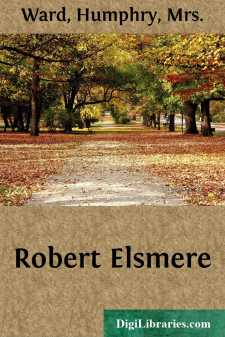 It was a brilliant afternoon towards the end of May. The spring had been unusually cold and late, and it was evident from the general aspect of the lonely Westmoreland valley of Long Whindale that warmth and sunshine had only just penetrated to its bare green recesses, where the few scattered trees were fast rushing into their full summer dress, while at their feet, and along the bank of the stream, the flowers of March and April still lingered, as though they found it impossible to believe that their rough brother, the east wind, had at last deserted them. The narrow road, which was the only link between the farmhouses sheltered by the crags at the head of the valley and those far-away regions of town and civilisation suggested by the smoke wreaths of Whinborough on the southern horizon, was lined with masses of the white heckberry or bird-cherry, and ran, an arrowy line of white, through the greenness of the sloping pastures. The sides of some of the little becks running down into the main river and many of the plantations round the farms were gay with the same tree, so that the farmhouses, gray-roofed and gray-walled, standing in the hollows of the fells, seemed here and there to have been robbed of all their natural austerity of aspect, and to be masquerading in a dainty garb of white and green imposed upon them by the caprice of the spring.

During the greater part of its course the valley of Long Whindale is tame and featureless. The hills at the lower part are low and rounded, and the sheep and cattle pasture over slopes unbroken either by wood or rock. The fields are bare and close shaven by the flocks which feed on them; the walls run either perpendicularly in many places up the fells or horizontally along them, so that, save for the wooded course of the tumbling river and the bush-grown hedges of the road, the whole valley looks like a green map divided by regular lines of grayish black. But as the walker penetrates farther, beyond a certain bend which the stream makes half way from the head of the dale, the hills grow steeper, the breadth between them contracts, the enclosure lines are broken and deflected by rocks and patches of plantation, and the few farms stand more boldly and conspicuously forward, each on its spur of land, looking up to or away from the great masses of frowning crag which close in the head of the valley, and which from the moment they come into sight give it dignity and a wild beauty.

On one of these solitary houses, the afternoon sun, about to descend before very long behind the hills dividing Long Whindale from Shanmoor, was still lingering on this May afternoon we are describing, bringing out the whitewashed porch and the broad bands of white edging the windows into relief against the gray stone of the main fabric, the gray roof overhanging it, and the group of sycamores and Scotch firs which protected it from the cold east and north. The western light struck full on a copper beech, which made a welcome patch of warm colour in front of a long gray line of outhouses standing level with the house, and touched the heckberry blossom which marked the upward course of the little lane connecting the old farm with the road; above it rose the green fell, broken here and there by jutting crags, and below it the ground sank rapidly through a piece of young hazel plantation, at this present moment a sheet of bluebells, towards the level of the river. There was a dainty and yet sober brightness about the whole picture. Summer in the North is for Nature a time of expansion and of joy as it is elsewhere, but there is none of that opulence, that sudden splendour and superabundance, which mark it in the South. In these bare green valleys there is a sort of delicate austerity even in the summer; the memory of winter seems to be still lingering about these wind-swept fells, about the farmhouses, with their rough serviceable walls, of the same stone as the crags behind them, and the ravines, in which the shrunken becks trickle musically down through the débris of innumerable Decembers. The country is blithe, but soberly blithe. Nature shows herself delightful to man, but there is nothing absorbing or intoxicating about her. Man is still well able to defend himself against her, to live his own independent life of labour and of will, and to develop the tenacity of hidden feeling, that slowly growing intensity of purpose, which is so often wiled out of him by the spells of the South.

The distant aspect of Burwood Farm differed in nothing from that of the few other farmhouses which dotted the fells or clustered beside the river between it and the rocky end of the valley. But as one came nearer, certain signs of difference became visible. The garden, instead of being the old-fashioned medley of phloxes, lavender bushes, monthly roses, gooseberry trees, herbs, and pampas grass, with which the farmers' wives of Long Whindale loved to fill their little front enclosures, was trimly laid down in turf dotted with neat flower-beds, full at the moment we are writing of with orderly patches of scarlet and purple anemones, wallflowers, and pansies. At the side of the house a new bow window, modest enough in dimensions and make, had been thrown out on to another close-shaven piece of lawn, and by its suggestion of a distant sophisticated order of things disturbed the homely impression left by the untouched ivy-grown walls, the unpretending porch, and wide slate window-sills of the front....