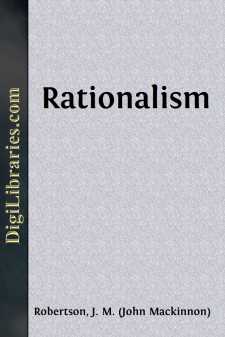 The names ‘rationalist’ and ‘rationalism’ have been used in so many senses within the past three hundred years that they cannot be said to stand quite definitely for any type or school of philosophic thought. For Bacon, a ‘rationalist’ or rationalis was a physician with a priori views of disease and bodily function; and the Aristotelian humanists of the Helmstadt school were named rationalistas about the same period by their opponents. A little later some Continental scholars applied the name to the Socinians and deists; and later still it designated, in Britain, types of Christian thinkers who sought to give a relatively reasoned form to articles of the current creed which had generally been propounded as mysteries to be taken on faith. The claim to apply ‘reason’ in such matters was by many orthodox persons regarded as in itself impious, while others derided the adoption of the title of ‘rationalist’ or ‘reasonist’ by professing Christians as an unwarranted pretence of superior reasonableness. Used in ethics, the label ‘rationalism’ served in the earlier part of the eighteenth century to stigmatise, as lacking in evangelical faith, those Christians who sought to make their moral philosophy quadrate with that of ‘natural religion.’ Later in the century, though in England we find the status of ‘rational’ claimed for orthodox belief in miracles and prophecies as the only valid evidence for Christianity, rationalism became the recognised name for the critical methods of the liberal German theologians who sought to reduce the supernatural episodes of the Scriptures to the status of natural events misunderstood; and several professed histories of modern ‘rationalism’ have accordingly dealt mainly or wholly with the developments of Biblical criticism in Germany.

New connotations, however, began to accrue to the terms in virtue of the philosophical procedure of Kant’s Critique of Pure Reason, though his Religion within the Bounds of Simple [blossen] Reason went far to countenance the current usage; and when Hegel subsequently proceeded to identify (at times) reason with the cosmic process, there were set up implications which still give various technical significances to ‘rationalism’ in some academic circles. In the brilliant work of Professor William James on Pragmatism, for instance, the term is represented as connoting, in contrast to the thinking of ‘tough-minded’ empiricists, that of a type or school of ‘tender-minded’ people who are collectively—

Yet it is safe to say that in Britain, for a generation back, the name has carried to the general mind only two or three of the connotations in Professor James’s list, and much more nearly coincides with his contrary list characterising ‘the tough-minded’:—

—though here again the item ‘pluralistic’ does not chime with the common conception, and ‘pessimistic’ is hardly less open to challenge....