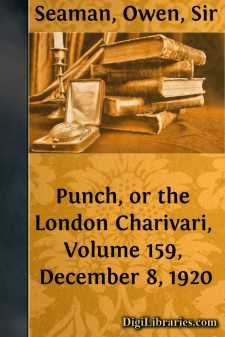 Lord Riddell, in giving his impression of President Wilson, says that his trousers and boots were not in keeping with the smartness of his appearance above the table. This is where the trained habits of journalistic observation come in.

In answer to many inquiries we are unable to obtain confirmation of a rumour that Mr. Charlie Chaplin's contemplated retirement is connected with an invitation from Mr. Horatio Bottomley to enter the arena of British politics.

According to an evening paper the lady who has just become Duchess of Westminster has "one son, a boy." On the other hand the Duke himself has two daughters, both girls.

Over two million Chinese pigtails have been imported into the United States, where they will be used for straining soup, declares a Washington correspondent. The wartime curtailment of the moustache, it appears, has done away with the old custom of straining the soup after it comes to table.

A police magistrate of Louisville, Kentucky, has been called upon to decide whether a man may marry his divorced wife's mother. In our view the real question is whether, with a view to securing the sanctity of the marriage tie, it should not be made compulsory.

"This morning," says a recent issue of a Dublin paper, "police visited Young Ireland office and placed arretssssshrrr rr rr r h bfad mb shs under arrest." Suspicion was apparently aroused by his giving his name in the Erse tongue.

Enormous damage, says a cable, has been done by a water-spout which struck Tangier, Morocco, on Saturday. We note with satisfaction, on the other hand, that the water-spout which recently struck Scotland had no ill effects.

Every hotel in London taken over by the Government has now been given up. The idea of keeping one as a memento was suggested, but Sir Alfred Mond decided to throw in his hand.

Asked his profession last week a man is reported to have answered, "Daily Mail Reader."

While a fire was being extinguished at Boston, Mass., recently the hose burst into flames. A country where that sort of thing occurs can afford to take Prohibition lying down.

A Constantinople message states that a Turk named Zorn Mehmed is one hundred and forty-six years of age. This is said to be due to the fact that for the last century or so he has kept a pet thyroid which he takes about on a chain.

We have no wish to cast any reflection on the courage of the Prohibitionists, but we can draw our own conclusions from the fact that we haven't noticed them rushing to Ireland.

A Denver newspaper points out that the "Wild West bandit" has died out. Our own impression was that he had got a job as a waiter in London.

Things are settling down in America. A news report states that Willard Mack, the actor, has only been divorced three times.

"We have an innate modesty about advertising ourselves," said Sir Robert Horne at the International Advertising Exhibition. A certain colleague of his in the Ministry is reported to have said that Sir Robert can speak for himself in future.